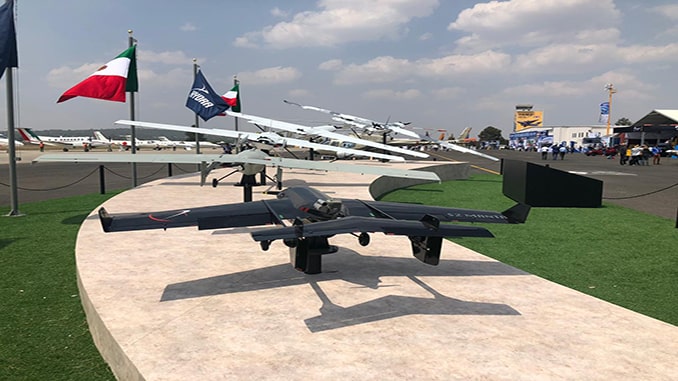 Hydra Technologies presented the evolution of its twin-engine unmanned systems during the 2019 edition of the “Feria Aeroespacial Mexico,” the most important aerospace trade show on the western hemisphere. The impressive display presented five models of the Hydra twin engine UAV from its first working model in 2003 up to the S50 Kukulkan to be released in 2020.

Anchoring the lineup to reality was the S45 Báalam, Hydra’s battle-proven flagship that was recognized for its technological prowess by the Mexican Air Force during the 2017 edition of the “Feria Aeroespacial Mexico” (FAMEX). This important recognition crowned an unprecedented series of Hydra’s successes in this industry, which include the prestigious “Al Aube” Outstanding Contributor Award given by AUVSI in Washington D.C. to recognize the member who figures prominently in the advancement of unmanned vehicle systems. But the major breakthroughs are real world achievements, like the fact that Hydra’s unmanned systems have been operating in civil, controlled airspace (rural and urban areas) for over ten years, while most of its competitors are only learning to do this.

The Kukulkan will keep the advantageous features of the S45 Báalam, including a push-pull engine configuration that eliminates the always present risk of catastrophic engine failure, as well as the capability to operate in severe weather conditions and strong wind that usually ground its competitors.

Hydra has gained its international reputation for quality and reliability through many years of constant operation of its systems and more than 100,000 hours of mission time. “Every single system that we have sold is still operational to this date”, states Alvaro Ortiz, marketing manager for the Mexican based corporation, while adding “and that includes systems used by the Mexican Federal Police since 2007. That’s more than 11 years! These systems are the AK-47 of unmanned air vehicles. They are designed to operate continuously and efficiently every single day, regardless of the complexity of the missions or the severity of the weather”. He adds: “Comparing our net operational record with any other UAS in the world will clearly show we are different”.

Almost 20 years of constant innovation, paired to an unparalleled customer support, has catapulted Hydra from being a small, local supplier to a world-class player.

Ortiz proudly concludes: “the unfortunate situation of internal conflict in Mexico has provided us with the most demanding testing ground to learn and create solutions that apply to the most complex environments”.

Hydra literally lives up to its latest slogan: “Flying high to face giants”.

Note 2: Hydra Technologies is a Mexican Corporation dedicated to the development, manufacture and deployment of military grade Tactical Unmanned Aerial Systems (TUAS). Based in Mexico City, Hydra has been in this business for almost seventeen years, accumulating more than 100,000 mission hours. It has been awarded some of the most important international recognitions, including the coveted “Al Aube” (AUVSI) to the outstanding contributor award, and the “Leonardo DaVinci” for technological advances in the field of aeronautics.