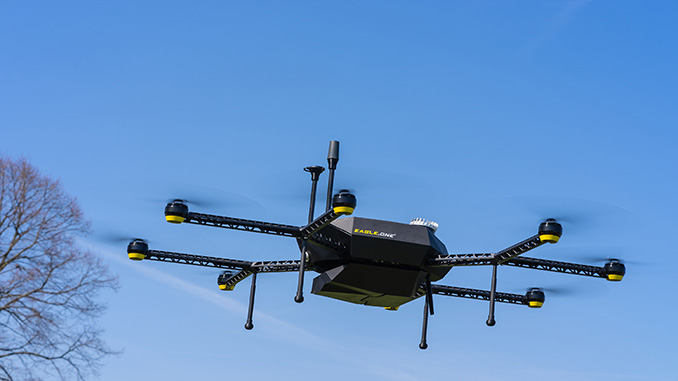 The AUDROS system, which enables drones to intercept foreign drones in a net, has been successfully tested in the Czech Republic. Contrary to competing systems – based on shooting down or electrically paralyzing the enemy – the AUDROS solution ensures full safety of people and property on the ground after the annihilation of a flying intruder. The Polish company Dronehub is part of the consortium that created the system.

The Eagle One drone designed by Fly4Future was used in the tests carried out in the Czech Republic. Upon detecting an unwanted intruder in the sky, the autonomous drone takes off from the docking station. After approaching a foreign drone, Eagle One releases a special net from the chassis in which it catches the enemy. Thanks to this solution – as opposed to the solutions based on shooting down or electric paralysis of a foreign drone – the AUDROS system ensures full safety for people and property on the ground after the annihilation of a flying intruder.

Importantly, the mission can continue without having to land after the first capture. If the system detects a second alien UAV, the hunter drone can intervene immediately. The autonomous system is equipped with artificial intelligence that controls and manages the system. Thanks to this, the need for human intervention is minimal. The task of artificial intelligence is to estimate the size and weight of the intruder drone and the chances of catching it.

The basis for the AUDROS system is the hub, i.e. the docking station of the Polish company Dronehub, in which the drone is permanently placed. Thanks to the advanced technology used in the hub, the drone remains ready to take flight, and after its completion, the used battery is autonomously connected to charging. Thanks to this, the unmanned aerial vehicle can carry out flights in a continuous mode, without the need to involve the operator to replace the battery.

“The autonomy of operations is the future of drone technology. Thanks to the use of our hub, the need for the operator’s work is reduced to a minimum, all processes are automated, which translates into the efficiency of the system, its reliability and ease of mission management. In safety-related flights, as in the case of the AUDROS project, reliability and readiness for non-stop flights are key” – says Mateusz Siwula, a designer from Dronehub.

“Our system can have very wide applications, as threats from the sky are an increasing challenge for security and safety services. AUDROS can be used to protect strategic objects or critical infrastructure, it can be used to protect the sky against terrorist attacks during mass events or to ensure the safety of VIPs” – says Jan Orava, a Project Manager from BizGarden.

The AUDROS (AUtonomous DROne System) project, implemented in cooperation with the European Space Agency (ESA), started in 2020. Its goal, in addition to creating a system for intercepting drone-intruders, is also to develop a system to combat CBRN threats – chemical, biological and radiological.

The most advanced Remote ID with WI-FI and BLE technology