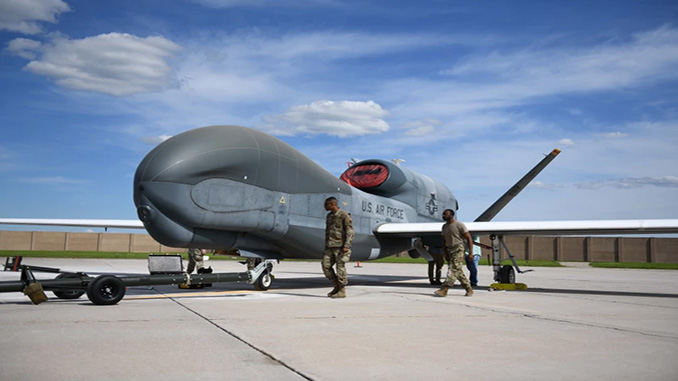 The first five Block 30 Global Hawks have already been transferred to GrandSky, the nation’s first and leading UAS-focused business park, and joined the four Block 20 Global Hawks that were transferred to GrandSky months ago. The process of transferring the final fifteen aircraft will be completed by the end of July. The aircraft will be outfitted with new and different sensor technology before beginning their new careers as part of the Test Resource Management Center’s (TRMC) High Speed System Test department.

Tom Swoyer, President of GrandSky, welcomes the aircraft as part of the long-term strategy of the research, development, training and testing aviation park.

“We are exceptionally excited at GrandSky to see all of these Global Hawks being brought to our ramp,” said Swoyer. “These aircraft have so much life left, and they will be transformed to support a new mission soon. This is a big opportunity for GrandSky and North Dakota.”

According to Senator John Hoeven, GrandSky was conceived to be able to support a program like Sky Range. Sky Range, a program managed by the Department of Defense Test Resource Management Center, is developing and integrating advanced sensors/capabilities and providing flight operations & maintenance for a fleet of un-manned air-vehicle systems to support the U.S. military’s hypersonic capability development.

The Global Hawks performed a variety of intelligence, surveillance and reconnaissance missions as well as battlefield communication missions for the warfighters in various theaters around the world. These aircraft have significant useful life left and are going to be repurposed for the SkyRange mission and be renamed Range Hawks. SkyRange will likely spawn a new wave of investment in facilities, equipment and infrastructure to support program growth.

“It is our goal to work with our partners and tenants to convert the Global Hawks into Range Hawks and keep them flying to keep UAS operations and research front and center. UAS operations and research is bolstering the North Dakota economy with high-quality and high-paying careers and its all growing,” Swoyer said. “The SkyRange program will be supported by GrandSky tenant and partner, Northrop Grumman.”

The repurposing of the Global Hawks at GrandSky represents a significant economic development opportunity for North Dakota and the Grand Forks Region. SkyRange will most likely require GrandSky and its partners to hire more people, quickly, but leaders are still working on those plans.

TRMC Director George Rumford declared last October at the UAS Summit in Grand Forks that SkyRange was coming to North Dakota and its beginning to arrive now.

“The SkyRange program at Grand Sky means that the Global Hawks will stay in Grand Forks for years to come and support new missions with new capabilities; that means jobs, investment and economic growth in the UAS and aerospace sectors are coming to Grand Forks and North Dakota,” Swoyer said.