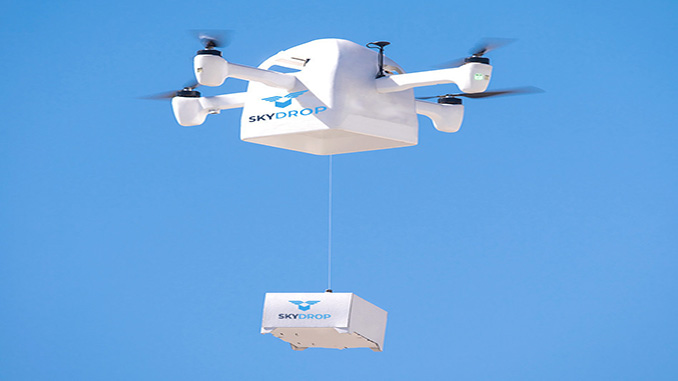 SkyDrop announced that production of the drone fleet for the commercial drone delivery trial with Domino’s is now complete.

SkyDrop (formerly known as Flirtey) and Domino’s Pizza Enterprises Limited (Domino’s), signed an agreement earlier this year to launch the second phase of commercial drone deliveries in New Zealand. This commercial trial with Domino’s is scheduled to launch in New Zealand in the coming months.

SkyDrop’s drone delivery system enables delivery of Hot & Fresh pizza from the local Domino’s store to the customer’s home. SkyDrop drones can carry a variety of Domino’s menu options, including popular choices such as: three Extra-Large Domino’s pizzas, or two Large Domino’s pizzas with one soda and one side dish (including dipping sauce).

In preparation for the commercial trial, SkyDrop is currently conducting test deliveries at its facilities in Reno, NV.

SkyDrop has raised approximately $40 million total investment to date, including a recent $2 million new investment from existing investors Sierra Angels, McFlirtey, Melbourne Angels, and Icehouse Ventures that is focused on advancing the commercial trial launch with Domino’s in New Zealand.

With New Zealand borders reopening, both SkyDrop and Domino’s are excited to be one step closer to offering drone delivery. The benefit of introducing drones as a delivery method alongside cars, electric scooters and bikes is that customers can enjoy the convenience of having Hot & Fresh pizzas delivered with Zero Contact to their homes by electrically powered drones, which also reduces traffic congestion and greenhouse emissions.

SkyDrop, (formerly Flirtey) is a full-stack solutions provider of hardware, software, and patents for autonomous last-mile drone delivery. SkyDrop is the pioneer of the commercial drone delivery industry, with a mission to make delivery instant for everyone, and a vision of drone delivery that is safer, speedier, quieter, cheaper, and greener. The company first made history in 2015 when it conducted the first-ever FAA-approved drone delivery in the US.

No Replies to "SkyDrop, Domino's gear up to launch commercial drone delivery trial in New Zealand"