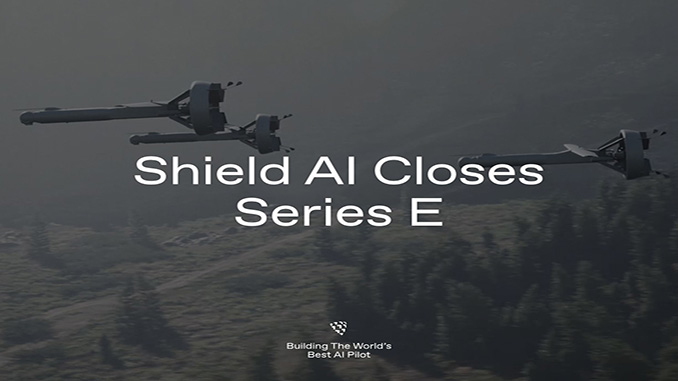 Shield AI, a fast-growing defense technology company building AI pilots for aircraft, today announced it has raised $90 million in equity and $75 million in debt as part of a Series E fundraising round, increasing the Company’s valuation to $2.3 billion. With this deal, Shield AI joins SpaceX, Palantir, and Anduril as the only multi-billion-dollar defense-tech startups of the past 20 years.

“The future of defense aviation is autonomy.  AI pilots are the most disruptive defense technology of our generation – and Shield AI is committed to putting the world’s best AI pilots in the hands of the United States and our allies. No company has assembled more, or recruits better AI engineering talent for, aviation autonomy and intelligent swarming than Shield AI,” said Shield AI’s co-founder and CEO, Ryan Tseng.

The round was led by Snowpoint Ventures’ Doug Philippone, who has also served as Palantir’s Global Defense Lead since 2008, with participation from multiple top-tier venture funds including Riot Ventures, Disruptive, which led Shield AI’s Series D, and Homebrew, which led Shield AI’s seed round. Previous lead investors include Point72, Andreesen Horowitz, Breyer Capital, and SVB Capital.

“Investors are flocking to quality. This round is a reflection of Shield AI’s success in creating great products, building a business with strong fundamentals, and dominant technological leadership – with an AI pilot proven to be the world’s best in numerous military evaluations. We love that they are leveraging an AI and software backbone across a variety of aircraft to deliver truly game-changing value to our warfighters. The work they are doing today is just the tip of the iceberg,” said Doug Philippone, co-founder of Snowpoint Ventures.

Shield AI’s Hivemind software is an AI pilot for military and commercial aircraft that enables intelligent teams of aircraft to perform missions ranging from room clearance, to penetrating air defense systems, and dogfighting F-16s. Hivemind employs state-of-the-art algorithms for planning, mapping, and state-estimation to enable aircraft to execute dynamic flight maneuvers and uses reinforcement learning for discovery, learning, and execution of winning tactics and strategies. On aircraft, Hivemind enables full autonomy and is designed to run fully on the edge, disconnected from the cloud, in high threat, GPS and communication-degraded environments.

Shield AI’s hardware products are its small-unmanned aircraft system (sUAS) Nova, and its medium-size vertical take-off and landing (VTOL) UAS, V-BAT. Hivemind is integrated onboard Nova and has been deployed in combat since 2018; it will soon be integrated onboard the V-BAT to further enhance its class-leading capabilities.

“Russia and China are jamming GPS and communications. U.S. and allied forces need swarms of resilient systems flown by AI pilots to operate in these denied environments. We call it low-cost, distributed strategic deterrence. If we had put up a bunch of AI-piloted swarms on the border of Ukraine, the Russians may have thought twice about invading. Distributed swarms are also more survivable than traditional strategic assets like an aircraft carrier (which is a high-cost, centralized strategic deterrent). Every ally is modernizing their military, and they’re looking at how AI-piloted aircraft can give them a strategic, tactical, and cost advantage,” said Brandon Tseng, Shield AI’s co-founder, President, and a former Navy SEAL.

“At the end of the day, this round and Shield AI’s work will positively contribute to global security and stability, which are foundational to human progress. Advancements in technology, medicine, education, and the overall human condition are made when security and stability are strong. This requires the United States and our allies, forces for good, to have the best capabilities at their disposal — including AI pilots that protect people and deter conflict,” said Shield AI’s co-founder and CEO, Ryan Tseng.

About Shield AI
Shield AI is a venture-backed company built around a team of proven executives, warfighters with relevant national security experience, and world-class AI engineers. The company has offices in San Diego, Washington D.C., Dallas, and Abu Dhabi. Shield AI’s products and people are currently in the field actively supporting operations with the U.S. Department of Defense and allies.