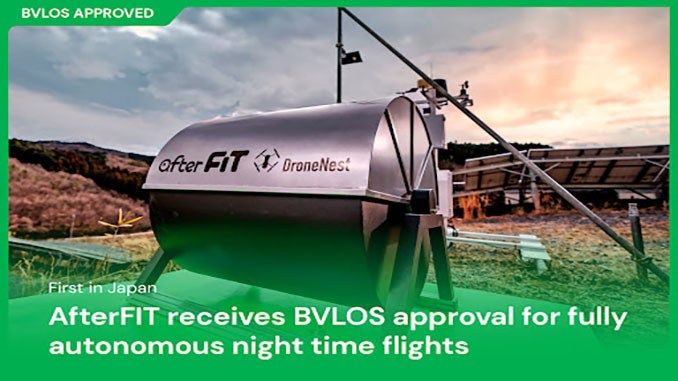 FlytBase, an enterprise drone autonomy platform company, is proud to announce that its partner, afterFIT, a Japanese renewable energy firm, has received approval to fly autonomous drones Beyond Visual Line-of-Sight (BVLOS) at night, a first in Japan. The approval has been granted by the Japanese Ministry of Land, Infrastructure, Transport and Tourism.

afterFIT has been conducting BVLOS inspections at their power plant (1,924KW) in Tochigi Prefecture from their Tokyo headquarters, which is approximately 200 kilometers away, using a modular system that includes DJI drones, low-cost docking station, and FlytNow Auto (a software product of FlytBase). The use of drones has enabled them to reduce the time it takes to inspect a MW from three hours to less than ten minutes.

How are autonomous drones assisting AfterFIT?
The following are the primary applications:

afterFIT has also been able to increase flight frequency by using drone docking stations. Solar power plants were previously only inspected four times a year; however, autonomous drones have allowed for more frequent inspections and early detection of damage.

To know more on how afterFIT is benefitting from autonomous drones, please read the following case study: https://flytnow.com/solar-farm-inspections/