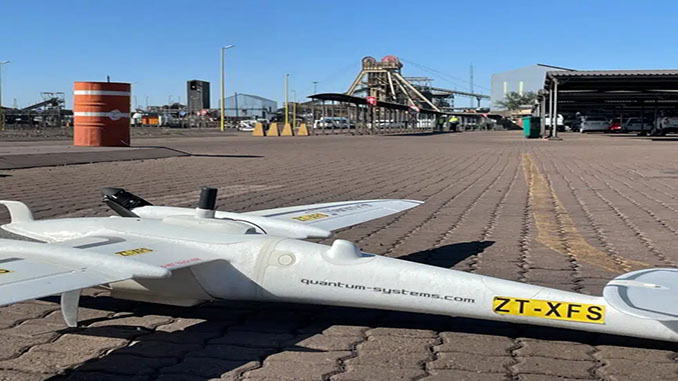 Having deployed the innovative technology solutions across multiple countries and projects over several years, Rocketmine’s expertise as a drone-technology leader and service to the African continent’s biggest companies is unsurpassed.

The use of a LiDAR scanner as remote sensing method generates precise, three-dimensional information about the shape of the Earth and its surface characteristics. This kind of fast actionable data is crucial for mine operators when calculating stock volumes and for other measurements.  Historically, aerial LiDAR has been a technology that could only be deployed by manned aircraft such as helicopters or planes.

Quantum-Systems introduced the Qube 240 LiDAR sensor in 2021, which has been transformative for the industry since, offering attractive applications for several operations. The Qube 240 produces survey grade results, weighs only 930g, and can be mounted on the Trinity F90+ eVTOL fixed-wing UAV.

As a technology agnostic company and being an early adopter at the same time, Rocketmine always deploys best in class technology and solutions for their clients’ missions in challenging and complex African environments. This strategy brought them together with Quantum-Systems, an innovation-driven company, pushing new technologies to market.

Quantum-Systems joined Rocketmine on their RocketTechTour in September 2021 for extensive deployment of the Quantum-Systems portfolio. Over 24 days and 3,000 km of travel, 15 missions were completed, 14 flight hours conducted, and three different sensors deployed, including the Qube240 LiDAR sensor, and more than two (2) Terabytes of survey grade LiDAR data was captured.

The operations on the tech tour were successful, proving the usability, accuracy, and quality of Quantum-Systems products.

As Camron Pfafferot, Rocketmine’s Head of Sales and Marketing says: “Rocketmine is currently backed by major multinationals in agriculture, mining, and security for leading aerial data services in Africa. Quantum-Systems brings increased capabilities to our existing service offering and is disrupting the manned LiDAR model through more agility, cost efficiency and versatility.  Through Rocketmine’s experience in South, East, West and North Africa, its global 4th ranking (Droneii), current and future clients are now in a position to benefit significantly from our long-range drone LiDAR turnkey offerings.”

The successful testing period led to the conclusion of the global enterprise agreement, solidifying the relationship between both companies.

No Replies to "Quantum-Systems and Rocketmine enter into strategic partnership"