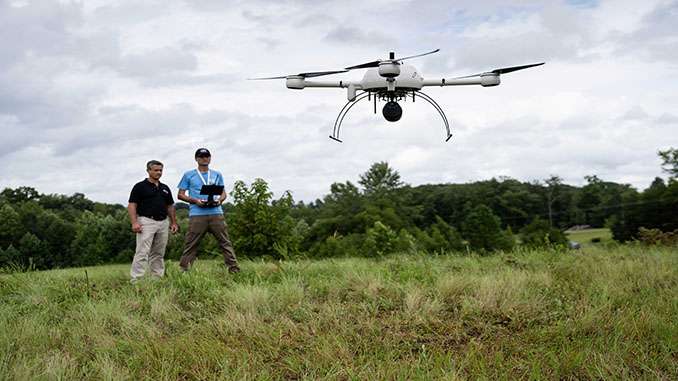 The owner of Allen Geomatics, P.C., in Advance, North Carolina, Allen was curious about
whether drone surveying methods could enhance the practices of his land surveying services and consulting firm. The company prides itself on paying attention to details in order to provide accurate data and avoid expensive mistakes.

So, it made sense for Allen to compare differences between traditional and drone LiDAR
surveying methods during a visit from an experienced drone surveyor, Robert Chrismon, PLS.

Surveying a 15-acre site for a development project, Allen and his three-man crew relied on
terrestrial methods and took ground shots, while Chrismon took a different approach high in the sky in piloting the mdLiDAR1000LR.

The results were eye-opening.

“This experience really helped me realize how close my small company is to considering actually getting a Microdrone to helps us get our topographic surveys, rather than relying on everything on the ground,” Allen said.

Picking up more with LiDAR

Chrismon met Allen at the survey site to assess the project, plan the mission and demonstrate the capabilities of using drone LiDAR.

“Jeff’s an old buddy of mine from my early days of surveying,” Chrismon said. “He’s interested in how drones can apply to surveying and I’m at a place where I can help Jeff out with understanding the LiDAR technology and how it may actually benefit Allen Geomatics in the future.”

The site, which will be developed into an eight-building apartment complex, presented some unique characteristics, including a hill with dense vegetation, a gully running down the middle of the property and a creek lining the edge of the site. When Chrismon arrived, Allen’s crew was already hard at work.

“There’s a good hill on the site. There’s going to be a lot of earth work to be done, so a topographic survey is important,” Allen said. He estimated that it might take five days in the field.

Traditional surveying methods, though, might grab a single point about every 25-50 feet, depending on the environment. Drone LiDAR, Chrismon said, will create 150-300 points per square meter – significantly more data than what is typically available through conventional means.

“We’re going to see undulations in the terrain that you’re just not going to capture typically with a conventional survey,” Chrismon said. “Looking at the distances between the shots taken by the total station, it leaves a lot of little undulations and information left to be located.”

“That’s what we pick up with the LiDAR.”

Getting into the air

The next day, while Allen’s three-man crew worked a fourth day in the field, Chrismon unpacked the mdLiDAR1000LR out of his SUV and set up for the flight.

“The obvious advantage to using a drone on this project is the vegetative area. We’ve got most of the site or a good portion of the site covered in woods,” he said. “I’m able to fly that in minutes.”

Once the flight was complete, Chrismon performed an initial data check with the mdInfinity quality control module to look at the trajectory and get a LiDAR coverage preview. While data at this point isn’t yet usable, it does give the surveyor a validation of the data collected in the field, averting possible return trips.

Satisfied with the initial outcomes, Chrismon was ready to head back to the office for the bulk of data processing work, but not before he returned to the woods with Allen to get an up-close view of their surveying methods.

“This is definitely not about which method is better. It’s all about the tools that surveyors use in the field. Some have applications that work well in one situation, while in other situations, you have equipment that may work well there,” he said. “I’m curious to see what the comparison looks like.”

Allen showed the challenges presented by the 40-foot wooded hill on the property that sloped down to the creek, with some undulations along the way down. Red flags signified spots where the Allen Geomatics crew set up shots.

“We’ll both have surfaces that are easily usable for whoever is doing the design work for
grading,” Chrismon told Allen. “But if it’s necessary, (drone LiDAR) has the refined data from the point cloud that we can always introduce.”

The following day, Chrismon visited the Allen Geomatics office to show the results from the
drone LiDAR survey and assess differences between the two methods.

Allen guessed that his field team had already put in about 40 hours total to survey about two-thirds of the 15-acre site. Data from a portion of the site already surveyed by Allen’s team included points that the program connected through yellow or green contour lines, indicating that more work may be needed to be done to confirm.

Orange and pink lines identified edges of roads along the property, which are important to help establish changes in slope on the roadway. Allen showed one area in which he had to manually add a line to connect two points that that survey analysis did not pick up.

Meantime, Chrismon estimated that he had put in about eight hours of work up to that point to prep for flight, survey the property and conduct some data analysis that produced more thorough renderings.

“I usually have to start taking information out of the drone LiDAR picture, whereas you’re
adding information to help complete it,” Chrismon told Allen.

One data element shows the trajectory and height of the drone flight, which can show how the drone stayed at a consistent height in following the undulations of the terrain. This helps produce accurate data.

The point cloud data produced renderings of power poles and other utility equipment on site, as well as the creek along the edge of the property. The drone LiDAR survey did appear to have some gaps in vegetation, particularly along the edge of the creek, where trees, shrubs and plants can be thicker because of more access to sunshine.

“But since it’s an area where the terrain doesn’t change much as far as relief, it’s a not a big deal that we missed that vegetation,” Chrismon said.

“What we have to do through processing is just whittle everything down, get rid of the vegetation and just have that ground information in there, and then that creek bank will become a lot more apparent,” he added.

The drone LiDAR survey also showed clear definition of the crown of the road in the area in which Allen had to draw in a contour line. An additional round of data analysis and cleanup showed that contour lines for both surveys lined up well in many areas, though the LiDAR survey appeared to produce more detailed contours closer to the creek bank.

In the end, a roughly 23-minute drone flight surveyed about 48 acres total, while Allen’s team surveyed the 15 acres in five days. There may be more work on the back end working with LiDAR data because of the ability to produce more detailed information for clients, though the time savings in the field with data collection is still considerable.

“There are going to be places where the LiDAR from the drone collection is going to shine a little better than conventional methods,” Chrismon said. “But there are definitely places in the woods that I wouldn’t touch with the LiDAR scanner that you guys on the ground picked up with no problem.

“I think it’s going to come out that it’s just another tool in the toolbox – but it’s one heck of a tool,” he added.

Said Allen: “It’s easy to pick out the features that we surveyed in the point cloud. … This has really helped me realize how close my small company is to using LiDAR to help us with our topos.”