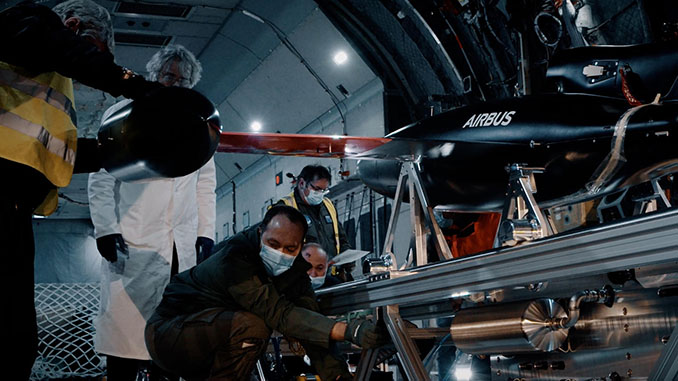 Airbus A400M, the world’s most advanced multi-role airlifter utilized by military forces around the globe, has demonstrated an airborne launch of a drone fulfilling a vital function for the Future Combat Air System.

During a recent test, an A400M deployed a drone from its opened rear cargo ramp door whilst airborne, validating its ability to air-launch drones. In the future such unmanned aircraft, called Remote Carriers, can serve as force multipliers for various missions, while keeping the pilots out of harm’s way. Manned-unmanned teaming (MUM-T) will allow the Remote Carriers to operate in concert with manned aircraft, opening new fields of tactics to surprise, deceive, deter, saturate and strike opponents.

During the A400M flight test, an Airbus-built Do-DT25 drone, acting as a surrogate Remote Carrier, was released over a test range in Northern Germany. Shortly after the launch, the drone’s parachute opened, delivering it safely to the ground. Throughout the test, the drone was connected and transmitting data to the A400M “mother aircraft”. This data transfer illustrates how Remote Carriers can be connected to a combat cloud network, providing vital information by serving the role of “eyes and ears” over the battlefield, whilst also enabling them to be tasked by the manned aircraft’s operators during their missions.

Building up the expertise in manned-unmanned teaming

Airbus will continue validation of the A400M as an airborne launch platform for Remote Carriers, envisioning the ability to deploy large numbers of these drones. The multi-role airlifter’s large cargo bay is expected to be able to hold 40 or more Remote Carriers. By bringing Remote Carriers closer to the fight, an A400M will provide the numbers in terms of flying platforms for a Future Combat System to serve multiple missions, even in a well-protected environment. The next flight test is planned to happen this year.

In addition, Airbus contribution to the 2021 German Air Force’s Timber Express exercise saw an important development step being cleared. A Eurofighter networking with and tasking two Do-DT25 drones in real-time, became the successful first application of MUM-T with operational military aircraft in Europe.

Previously, Airbus also demonstrated the control of five Do-DT25 drones by a mission group commander who was airborne in a manned command and control aircraft. Validating such elements, as connectivity, human-machine interface, and the concept of teaming intelligence through mission group management, also constitute key steps towards using Remote Carriers as force multipliers within the Future Combat Air System.