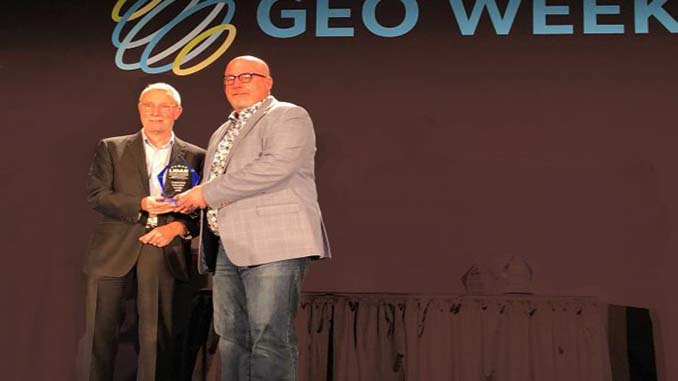 Emesent is proud to have their Hovermap LiDAR mapping and autonomy payload announced as the winner of the Geo Week LiDAR Leader Award for Outstanding Innovation.

Announced at the Geo Week Conference in Denver today (February 7, 2022), the LiDAR Leader Awards honor the achievements of individuals and teams working in the geospatial technology space. The Outstanding Innovation in LiDAR Award highlights excellence in innovations in this space.

“Having first launched Hovermap at Geo Week in 2019, our team is extremely proud to be acknowledged for the advances we’ve made in LiDAR-based SLAM mapping and autonomy since the launch. It’s been amazing to see the value our customers have enjoyed from scanning hazardous, GPS-denied environments that were previously inaccessible,” said Dr Hrabar.

Hovermap was recognized for its advanced autonomy and mapping capabilities. When mounted on a drone, it provides safe, autonomous, beyond line of sight flight in challenging areas even without GPS.

Another key feature considered was Hovermap’s versatility. The plug and play capability allows users to easily detach it from a drone to perform walking, vehicle-mounted, or ground robot- based scans. This allows mapping practically any indoor or outdoor area quickly and easily.

The award was well-timed with the recent opening of Emesent’s US office in Denver. Members of the US-based team were excited to receive it and are confident this will further boost Emesent’s reputation in the North American market.

To find out more about Emesent and their autonomous mapping technology, Hovermap, visit their website.

About Emesent and Hovermap
Emesent is a world leader in drone autonomy, LiDAR mapping, and data analytics. Headquartered in Australia, with a global reach through their network of 40+ resellers and regional offices in the US, UK, and Germany. Founded in 2018, their vision is to be the world leaders in the autonomous digitalization of the most challenging and seemingly unreachable places on Earth and beyond. Emesent has built a reputation for delivering high quality data capture in the mining, infrastructure, survey, and mapping industries. Their team of roboticists, engineers, and business development experts work side by side to deliver revolutionary efficiency, safety, and operational insights to their customers.

Their flagship product, Hovermap, is a versatile LiDAR mapping and autonomy payload, which can be mounted to a drone to provide autonomous mapping in challenging, inaccessible areas. Hovermap is not only for drone use, its flexible design allows it to be used for walking, vehicle, or backpack-mounted scans.

Sagetech Avionics to Test Detect And Avoid Technology with NUAIR