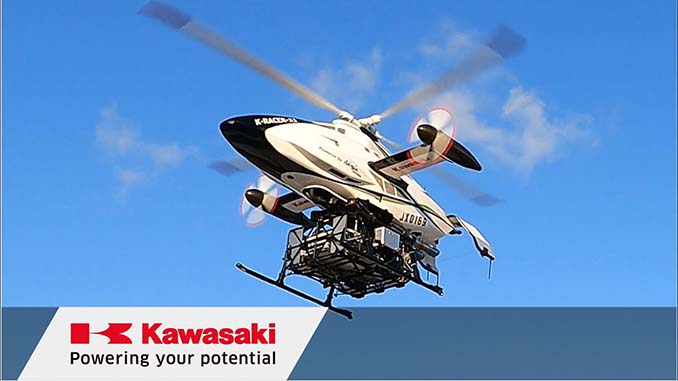 By combining the helicopter technology we have developed and the small high-power engine cultivated in motorcycles, we are developing with the goal of achieving a payload of 200 kg, which is difficult to achieve with unmanned aerial vehicles such as drones. In the future, we are trying to make it a power unit with a view to decarbonization.

As the first target for market launch, we are assuming mountaineering transportation, and in the mass production type, we will carry out technology demonstration step by step with the goal of transporting a payload of 200 kg at an altitude of 3,000 m. First of all, we plan to develop a transport-type demonstration machine “K-RACER-X1” that gives the existing aircraft a payload capacity of 100 kg in lowlands, and conduct a technical verification test with the aim of quickly incorporating the opinions of customers. Next, we developed a new aircraft “K-RACER-X2” that can carry a payload of 100 kg at an altitude of 3,000 m by applying the technology and know-how acquired with the existing aircraft and “K-RACER-X1” in mountainous areas. We will carry out technology verification tests for transportation, which will lead to the development of mass-produced models with a payload of 200 kg.

We are currently developing it with a view to carrying out unmanned material transportation in collaboration with delivery robots in the future.