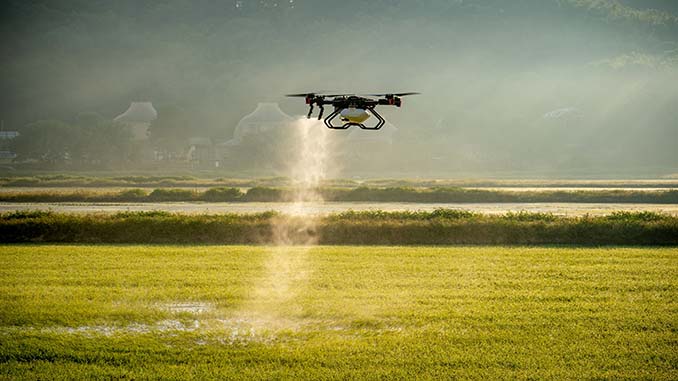 On 22 December, XAG Annual Conference 2021 was held in Guangzhou, China with the theme “Step into Agrifuture”, which launched a series of agricultural innovations to empower farmers with more sophisticated autonomous solutions. Five new products, including the XAG P50 and P100 Agricultural Drone, XAG M500 and M2000 Remote Sensing Drone, and the updated XAG R150 Unmanned Ground Vehicle, are released in China and will be available for global sales in 2022.

Over the past eight years, XAG has been successfully scaling up its agricultural drones across 42 countries and regions to bridge the digital divide in rural areas. The newly updated farming drones and robots not only enrich XAG’s six smart agriculture product lines, but also leapfrog the previous models in terms of efficiency, precision, and safety. They are full of human-centred design to bring thoughtful care to users on farms.

The two new models of XAG Agricultural Drone, P100 and V50, follow brand new principles from their structural design to task systems. The XAG P100 inherits the classical quadrotor structure with a 40kg effective payload, while the V50 adopts XAG’s leading dual tilt-wing design to meet the needs of different users based on the farm size.

Both new drones are crafted in a structure that can fully separate their flying platform from task systems. This means that they can switch flexibly between the function of crop spraying, granule spreading and field survey. Transportation and maintenance are also made much easier to increase operation efficiency.

Back to the past, the agricultural drone is unable to work without network signals because its autonomous flight relies on the RTK signal of the 4G network. Now with the more advanced SuperX 4 Pro flight control system, the XAG P100 and V50 can remain steady, high-accuracy operation around farms even with weak internet infrastructure. It brings farmers the new possibility to operate in a “networkless” area.

XAG has also upgraded the three task systems on both P100 and V50 Agricultural Drone to further improve efficiency and precision in various application scenarios. The XAG RevoSpray 2.0 system adopts the intelligent rotary atomization technology that allows fine droplets to be accurately sprayed between the size of 40-600μm, and therefore greatly cut down the use of pesticides.

The XAG RevoCast 2.0 system was redesigned with dual vertical centrifugal discs and novel smart screw feeder, which can achieve a broadcast efficiency of 80kg urea per minute. XAG RealTerra 2.0 as the mapping module can equip the drone with the ability to survey a maximum area of 13 hectares per sortie in farmland and orchard. It supports real-time map stitching and is able to generate high-definition field map immediately once landing.

Based on its accumulated experience in agricultural autonomous driving and AI training, XAG has made further technological upgrades to the R150 Unmanned Ground Vehicle. The new generation of XAG R150 is a scalable open payload platform that can be embarked with different task systems for high-precision crop spraying, fertilisation, and mowing.

The improved RevoMower 2.0 system facilitates grass cutting on complex terrains such as farmland, mudflats, and orchards. Featured the 6-kilowatt cutting power and dual-blade structure, XAG R150 can control weeds and handle small shrub with ease on farms. Users will no longer need to sit on a manual driving mower where they suffered from loud noise, dust, and mosquitoes.

In addition, XAG has added the HydraulicSpray system as another task system to its R150, allowing users to rapidly assemble a group of liquid pumps and pressure spray nozzles for crop protection in various farming landscapes.

Owing to the SuperX 4 Pro Control System, XAG R150 can drive fully autonomously for a longer duration. Leveraging the binocular vision and MMV 4D imaging radar, it can perform auto-location of field ridges and visual tracking, while automatically avoiding obstacles amongst trees.

For large-scale and high-frequency farmland survey, the XAG M2000 Remote Sensing Drone would be a more ideal solution. This is XAG’s first-ever EVOTL (Electric Vertical Take-off and Landing) fixed-wing flight platform that can be deployed at any spot and take off without site constraints. Equipped with the intelligent fast charging battery, XAG M2000 can fly up to 90 minutes in a single sortie and map an area of up to 533 hectares.

Since one single technology has limited power to bring up transformation, XAG has introduced its smart agriculture ecosystem into the real-world autonomous farms throughout the full cycle of crop cultivation.

In April 2021, XAG launched the “Super Cotton Farm” in Northwest China, where two post-90s generation farmers manage a 200-hectare cotton field with the help of drones, robots, and AI. After the trial of one planting season, the XAG Super Cotton Field has reduced its labour costs by 60% and used 36% less pesticides compared to traditional farm. The bumper harvest of snow-white cotton also demonstrates the scalability of an autonomous farm driven by digital technologies.

As another new incubator for agricultural technologies, “the Super Farm Project” was also launched by XAG at the end of 2021 in Guangzhou, China. XAG hopes to build the coolest and most hardcore autonomous farm model that can be replicated and promoted in the future.

DRONEDEK to Demo Its Smart Mailbox at CES in Las Vegas