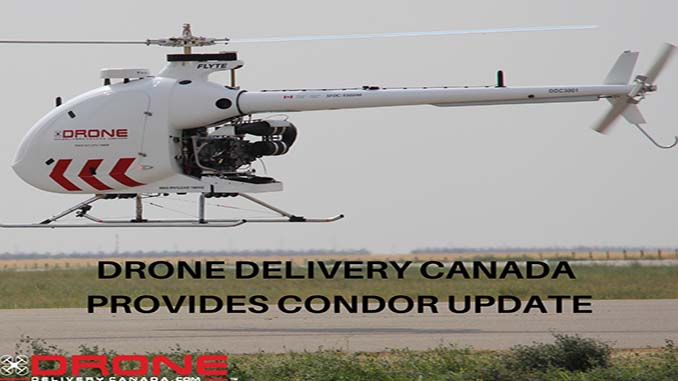 Drone Delivery Canada Corp. is pleased to provide an update on the Condor drone development.

The Company has successfully tested numerous aspects of the Condor solution at test ranges in Alma, Quebec at the Unmanned Aerial System Centre of Excellence, and in Foremost, Alberta at the UAS Test Range.  On November the 4th, 2021, the Company announced its Ontario Commercialization Centre, where Condor testing will continue, in addition to customer pre-delivery inspection, maintenance, training and customer demonstrations.   The Centre will also support testing and development of multiple DDC platforms, including the:  FLYTE software, Detect and Avoid (DAA) systems, Canary drone, DroneSpot depots, etc.

“We continue the development & testing of the Condor drone, and related necessary ecosystem components, and we are pleased with the progress & success we are having thus far.  This is something unique that has never been done before.  In a highly regulated and safety-centric industry, it’s important to be methodical and approach this innovative development in a disciplined way,” said Paul Di Benedetto, Company Co-Founder and Engineering Strategist.

“As a company in early-stage commercialization, and in a new and highly regulated industry, Condor progress continues at a pace commensurate with the overall complexity of the solution, global supply chain issues, and the impacts of the pandemic in Canada.  The Condor will come to market when the Company feels confident that it is ready.  Market response to the Condor has been favourable from prospects in Canada and internationally and we are pleased with what we think the Condor will bring to our customers and the industry in terms of potential logistical cost savings & efficiencies and incremental revenue opportunities,” said Michael Zahra, President & CEO of DDC.

The Condor is expected to be commercially available in the latter part of 2022.

Drone Delivery Canada Corp. is an ISO 9001 certified, award-winning drone technology company focused on the design, development, and implementation of its proprietary logistics software platform, using drones. The Company’s platform is used as a Software as a Service (SaaS) model for government and corporate organizations globally.