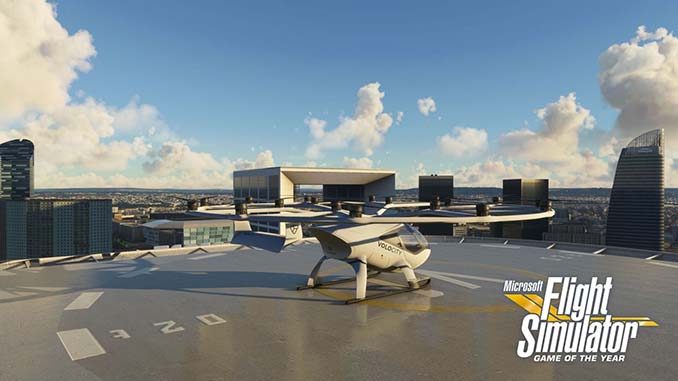 Volocopter, the pioneer of urban air mobility (UAM), showcased its 100% electric VoloCity air taxi today at CoMotion LA, the three-day conference that is bringing together global leaders in emerging mobility. Those attending CoMotion LA can interact with the aircraft up close and learn how UAM can improve city life around the world. One important success factor for future UAM operations is public acceptance, and Volocopter’s campaign in the American market emphasizes just that.  The VoloCity will also be featured as a digital flight experience in the upcoming Microsoft Flight Simulator.

A Physical UAM Experience for Mobility Stakeholders at CoMotion LA
Volocopter introduces a bold new frontier of mobility at CoMotion LA: urban air mobility. UAM is a specific niche of aviation focused on mobility in urban airspaces. With a keynote presentation from Volocopter’s Chief Commercial Officer, Christian Bauer, and the interactive static VoloCity air taxi model onsite, the company offers the US a second opportunity to experience its aircraft in person and learn more about its future services.
“We are realizing our vision of urban air mobility in the US now step-by-step,” says Christian Bauer, Volocopter CCO. “First, we showed that our technology works, and we can work together with local aviation authorities by flying publicly at EAA AirVenture Oshkosh 2021. Second, we partnered with the experts at Urban Movement Labs to approach important stakeholders in Los Angeles, a highly relevant US city for us. Now, we are bringing our aircraft to the city to empower people with knowledge about UAM and first-hand experience with our aircraft. We are providing this learning opportunity onsite at CoMotion LA and virtually also to people across the world on 18 November 18 with the new Microsoft Flight Simulator release, where Volocopter is included as the first electric air taxi.”
Earlier this year, Volocopter announced its partnership with Urban Movement Labs (UML), a nonprofit organization facilitating the deployment of new mobility technologies in Los Angeles. Volocopter is working with UML to network with key interest groups on the federal and city levels. This collaboration opens the door for discussions between Volocopter and local entities interested in launching UAM services in the future.
“Our partnership with Volocopter expands the work we are executing as a part of the UAM Partnership with the City of Los Angeles.  This work will inform the future UAM ecosystem in L.A. using a community-first strategy, conducted with Angelenos for Angelenos. By working together with Urban Movement Labs, Volocopter is showing their commitment to keeping the community in mind, and we are proud to be partnering with these pioneers on this journey and facilitating their market entry,” says Sam Morrissey, Executive Director at Urban Movement Labs.
Bringing a Digital VoloCity Experience to Your Xbox
In January of this year, Volocopter announced its intention to bring air taxis to US cities. In July, Volocopter conducted the first-ever crewed public test flight of a fully electric vertical take-off and landing (eVTOL) air taxi in the US. Soon, people in LA and worldwide will also be able to experience virtual flights in the VoloCity in the newest release of Microsoft Flight Simulator (MSFS). In a partnership with the MSFS team, Volocopter’s VoloCity will be the first rotor-based vehicle in MSFS.
“Volocopter’s vision of urban air mobility is compelling, and we are delighted to present a hands-on preview of the aircraft inside Microsoft Flight Simulator. We had a great time working closely with the engineering and design teams at Volocopter during the last 6 months and are pleased with how accurate the electric VoloCity was realized in Microsoft Flight Simulator. Starting tomorrow, flight simmers and aviation enthusiasts everywhere can experience this extraordinary aircraft for the first time,” says Jorg Neumann, Head of Microsoft Flight Simulator.
Volocopter is developing a family of electric aircraft for UAM services: the VoloCity air taxi for short urban passenger routes, the VoloDrone for heavy-lift transport, and the VoloConnect for suburban-downtown connections. With their respective physical (VoloPort and digital (VoloIQ) infrastructures, Volocopter aims to create UAM ecosystems that complement existing urban transportation systems in the next 2-3 years. When final certification from the European Union Aviation Safety Agency (EASA) is granted, concurrent certification from the Federal Aviation Administration (FAA) would enable Volocopter to bring its services to the US.

About Volocopter Volocopter is building the world’s first sustainable and scalable urban air mobility business to bring affordable air taxi services to megacities worldwide. With the VoloCity, the company is developing the first fully electric “eVTOL” aircraft in certification to transport passengers safely and quietly within cities. Volocopter leads and cooperates with partners in infrastructure, operations, and air traffic management to build the ecosystem necessary to ‘Bring Urban Air Mobility to Life’.
In 2011, Volocopter performed the first-ever crewed flight of a purely electric multicopter and has since showcased numerous public flights with its full-scale aircraft. The most notable have been the public test flights at Singapore’s Marina Bay in October 2019 and the world’s first autonomous eVTOL flight in Dubai 2017. Volocopter is also developing products for the logistics space with their heavy-lift cargo variant, the VoloDrone.
Founded in 2011 by Stephan Wolf and Alexander Zosel, Volocopter has 400 employees in offices in Bruchsal, Munich, and Singapore. The company has raised a total of €322 million in equity. Volocopter‘s investors include Daimler, Geely, DB Schenker, BlackRock, and Intel Capital amongst others.
Find out more at: www.volocopter.com

No Replies to "Volocopter in the United States: Combining Physical & Digital UAM Experiences"