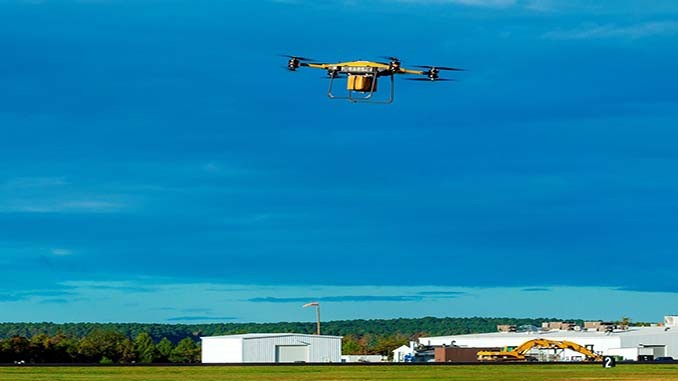 The Navy and Marine Corps may soon have a way to resupply warfighters on the front line using unmanned systems capable of delivering necessary supplies from a distance in a variety of scenarios.

The Department is considering several cargo resupply systems and recently demonstrated these capabilities to senior leadership during an event Oct. 27 at NAWCAD’s Webster Outlying Field.

“It’s exciting to see the close collaboration between the program office, NAWCAD and the operators,” said NAVAIR Commander Vice Adm. Carl Chebi, who attended the event. “The team’s ‘can do’ spirit and innovative acquisition approach will speed much-needed capability to the Navy and Marine Corps.”

TRUAS is a Marine-focused platform for tactical resupply primarily on shore. It has a shorter range than Blue Water, but a heavier lift around 150 pounds. It’s intended to transport items like food and tactical gear to Marines in the field. Blue Water is a Navy-focused platform for resupply at sea. It has a longer range, and a smaller footprint to better fit onto ships. Its cargo capacity is smaller than TRUAS at 30-50 pounds.

“The demonstration highlighted the basic capability of the systems to operate autonomously, to have mission plans uploaded and to execute the flights with little to no input while they were in the air,” said Cmdr. Seth Ervin, Air Test and Evaluation Squadron (UX) 24 chief test pilot.

“These systems have to be transportable, so they have to come in cases and they have to be expeditionary,” Ervin said.  “And that was really the focus of today, to walk through, in a fairly quick fashion, and show how easy it is for a basically trained Marine or Sailor to get the system out of a box, to get it set up, to get it uploaded, and hit go.”

Ervin’s team demonstrated the capabilities of a land and air drop using the TRV-150 and different payloads. For the first mission they did an air drop, where the system flew to pre-programmed point, dropped the payload and flew back.  During the second leg, the TRV-150 flew to specified coordinates, landed and released the payload. The operator on the ground retrieved the package and once it was safely out of the way, the operator pressed a button to return the UAS to its location.

“Unmanned logistics supply aircraft will keep Sailors and Marines out of harm’s way and can provide much needed logistics support and assistance with humanitarian relief efforts,” said Rear Adm. Brian Corey, the Program Executive Office for Unmanned Aviation and Strike Weapons. “With unmanned assets, we have a resupply that will be much more effective and give our operators the ability to maneuver around the battlefield in ways they haven’t been able to do before.”

Both the TRUAS and BWUAS teams are working closely with their Marine Corps and Military Sealift Command counterparts to rapidly bring these systems to the warfighter through innovative, non-traditional acquisition strategies. Both teams directly engaged with fleet users to understand what capability they need, and how they will use the capability in operation.

PMA-263, in collaboration with NAVAIR’s AirWorks, IMPAX, WOLF and other contracting teams, used Other Transaction Authorities (OTAs) to quickly execute TRUAS. OTAs give the program the ability to make ongoing changes to the prototype based on the users’ input significantly reducing development time compared to a traditional acquisition program. The TRV-150 will be delivered to Marines as part of an extended user assessment in summer 2022.

The vision is to have a family of unmanned cargo resupply systems for the Navy and Marine Corps ─ some on the ground and some in the air, Corey said.

STARE on Display at GA-ASI Booth During Dubai Airshow