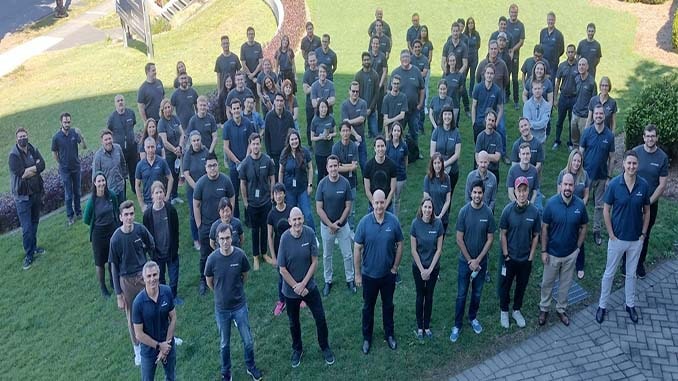 An award-winning Australian startup has had stratospheric staffing growth of more than 1400 percent in just three years of operation, with plans now afoot to double in size by the end of this financial year.

Drone automation, mapping and data analytics company Emesent is hiring an average of four people per week as demand for its services skyrockets across the globe.

Co-founders Dr Stefan Hrabar and Dr Farid Kendoul started the business with a team of seven at the end of 2018, having spent a decade working at CSIRO on drone autonomy, and 3D LiDAR-based simultaneous localisation and mapping techniques.

Dr Hrabar said when he and his co-founder started the company they had no idea they would enjoy so much success so quickly.

“It couldn’t have gone any better,” he said.

“We’ve been fortunate that we’ve been able to implement a product that provides a very valuable solution to our customers.”

Dr Hrabar said while Covid-19 had made expanding its global team difficult, the company had still managed to significantly increase its skilled workforce.

“We’ve had to hunt high and low to find the right people,” he said.

“But people are excited about what we’re doing, so we’ve been able to secure an incredible team that will only continue to grow.”

Emesent, which has already deployed its technology in 32 countries, now has grand plans to double the size of its workforce by the end of June 2022, in just eight months time.

“Our plan is to triple our engineering team, grow our sales and customer support offering in the UK and the US, and set up regional offices there,” Dr Hrabar said.

“We have continued to set ourselves very ambitious goals that we’ve been able to achieve, so we’re hoping to continue that trend over the coming 12 months.”

The co-founder and chief executive said Emesent’s flagship product, Hovermap, had been a game-changer for the mining industry.

Its client list is a who’s who of the sector, including giants BHP, Glencore and Anglo American.

Dr Hrabar said the smart mobile scanning unit was unique in that it could be attached to a drone, vehicle, backpack or used for walking scans.

“The fact that companies can get a high quality of data in areas that were previously inaccessible is incredibly powerful,” he said.

“Not only are staff being kept safe, but the technology is giving businesses new insights, which is drastically improving productivity and efficiency.”

Emesent’s is also hoping to grow its presence in other markets, including oil and gas, architecture, engineering and construction.

Emesent is a world-leader in drone autonomy, LiDAR mapping, and data analytics. Founded in 2018,  their vision is to be the world leaders in the autonomous digitalization of the most challenging and seemingly unreachable places on Earth and beyond. Its flagship product, Hovermap, is a versatile LiDAR mapping and autonomy payload, which can be mounted to a drone to provide autonomous mapping in challenging, inaccessible areas. Hovermap is not only for drone use, its flexible design allows it to be used for walking, vehicle, or backpack-mounted scans.