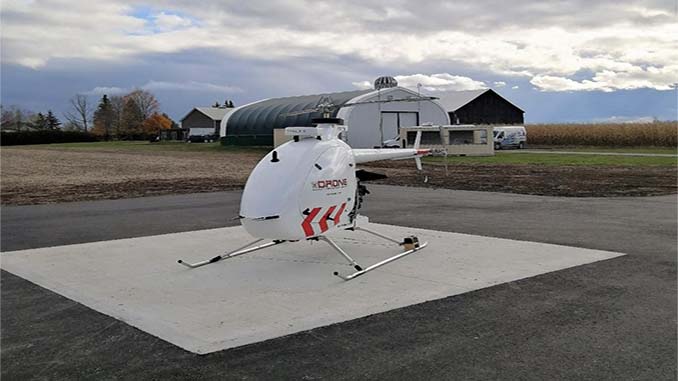 Drone Delivery Canada Corp. is pleased to announce it has opened a new Commercialization Centre to augment its main facility and test range.

The Commercialization Centre is on approximately 100 acres west of the Company’s main office and will be operational in November. DDC will maintain a permanent facility there with dedicated staff and will scale with Company growth.

The Condor is currently the Company’s largest drone with an expected range of 200km (124mi) and a payload capacity of 180kg (396lb) and is fully integrated with the Company’s patented and award-winning FLYTE software system.

“With the ongoing successful testing of our Condor delivery drone and as we work towards its commercialization, this location will facilitate engineering testing, pre customer delivery verification, customer demonstrations, customer & employee training, and maintenance of Condor drones, as well as for future drone platform enhancements and modifications for an anticipated diverse range of future applications, potentially to include inspection and data collection services.  The new Commercialization Center will bring lasting commercial benefits across the whole organization,” said Michael Zahra, President & CEO of DDC.

Additionally, first test flights of the next generation Sparrow drone are expected to commence in November. It is expected to have a range of 30km and a payload capacity of 4.5kg, along with next generation motor technology, next generation battery technology, touchless cargo drop functionality, an optional public announcement system and an optional aircraft parachute. This new functionality is expected to further unlock potential customer use-cases and facilitate future flights over people to open up new, commercially addressable future markets in urban and residential areas for B2B and also B2C retail residential deliveries.

The current version Sparrow continues to commercially operate successfully at current customer projects and will continue to be available to future customers.  As previously announced, the Company will look to complete the Robin XL commercialization as future market demands may indicate.

Attached to this release are Company-supplied images from the Commercialization Centre.

For a previously released video of the Condor in flight, please visit:    https://youtu.be/z6alNN-Uaxk

Drone Delivery Canada Corp. is an ISO 9001 certified, award-winning drone technology company focused on the design, development, and implementation of its proprietary logistics software platform, using drones. The Company’s platform is used as a Software as a Service (SaaS) model for government and corporate organizations globally.