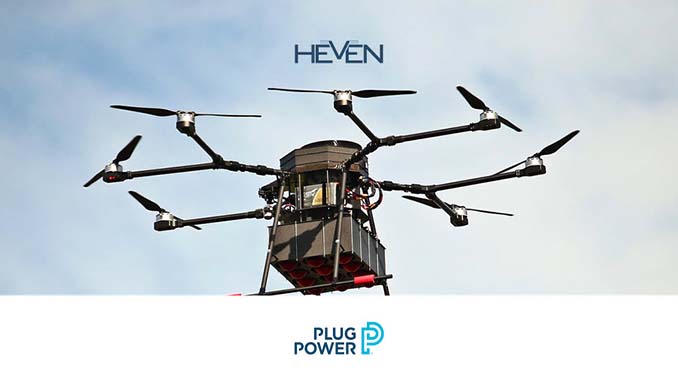 HevenDrones, a leader in the development and commercialization of actionable drone platforms with heavy-lift capabilities today announced a bi-lateral alliance with Plug Power (NASDAQ: PLUG), a leading provider of hydrogen engines and fueling solutions enabling e-mobility. HevenDrones designs its own proprietary operating systems and is the exclusive company selected by the Israeli Ministry of Defense to develop a customized fleet of hydrogen fueled drones. Specifically, HevenDrones is working with DDR&D, a specialized unit responsible for research and development of advanced technologies.

Plug Power and HevenDrones plan to cooperate on the commercialization of hydrogen fuel cell powered heavy-lift actionable drones and related support equipment and infrastructure. Together, the companies plan to provide an integrated solution to power and refuel HevenDrones’ next generation fleet with the key objective of providing extended flight times and range.

Bringing together HevenDrones capabilities in developing and manufacturing actionable heavy lift drones with Plug Power’s fuel cell stack technology and systems capabilities, the companies aim to develop hydrogen-powered drones of varying sizes capable of lifting heavy weights and flying for extended periods of time. HevenDrones’ proprietary stabilizing technology provides the capability to lift and move heavy and unbalanced and kinetic loads with applications across a variety of industries and markets.

This initiative is part of Plug Power’s strategy to bring its proven hydrogen ProGen fuel cell technology to new markets through engaging leaders in industries such as commercial aviation, aerospace, and now drones. The joint alliance is an important milestone for HevenDrones, which is already a leader in designing and producing heavy-lift and extended flight time drones. By leveraging the expertise of Plug Power’s technology, HevenDrones will dramatically enhance the capabilities of its proprietary heavy lift actionable drone systems and open new markets and applications for its fleet of drones.

The effort will also include additional scopes of work to provide an entire hydrogen ecosystem, including, hydrogen supply, infrastructure, fueling and refueling for drone applications.

The carbon-free and eco-conscious hydrogen system will incorporate a lightweight Plug Power ProGen-based hydrogen fuel cell stack specifically designed for drone applications. In addition to the extended range and flight times, the hydrogen-powered drones will also positively contribute to the environment and set standards in clean energy drone transportation.

Keith Schmid, who leads the Mobility and Stationary Power Solutions business unit for Plug Power, said, “We believe that the combination of our leading fuel cell technology and related hydrogen infrastructure together with the impressive drone technologies being developed by HevenDrones creates exciting potential in this high growth industry. Plug Power is focused on expanding its market leadership position and this is a natural extension of its product line. We are pleased to work with HevenDrones to develop this potential and believe there are significant benefits to our customers by working together.”

Thomas Jones, Director of UAV/Aerospace Technology at Plug Power, said, “We are excited to be teaming with HevenDrones to expand our capabilities for placing hydrogen fuel cells in drones. This is an area where hydrogen can be a game changer. We have been impressed with their capabilities and look forward to working together.”

Bentzion Levinson, CEO of HevenDrones, said, “We are thrilled to work with Plug Power on this strategically important initiative. We are pleased to join forces with a global leader in fuel cells and believe that combined with our leading edge in heavy lift drones and our unique operating system software, we can create a compelling partnership to take drone technology to the next level. We are excited to continue our journey with a company as well regarded as Plug Power.”

This initiative comes as Plug Power is significantly growing its aerospace fuel cell system capabilities, in line with the company’s vertical integration strategy. As part of this effort, Plug Power is expanding its ProGen platform for additional aerospace applications, including drones, UAVs and aircraft with different weight restrictions and other unique requirements.

Plug Power is building the hydrogen economy as the leading provider of comprehensive hydrogen fuel cell (HFC) turnkey solutions. The company’s innovative technology powers electric motors with hydrogen fuel cells amid an ongoing paradigm shift in the power, energy, and transportation industries to address climate change and energy security, while providing efficiency gains and meeting sustainability goals. Plug Power created the first commercially viable market for hydrogen fuel cell technology. As a result, the company has deployed over 35,000 fuel cell systems for e-mobility and has become the largest buyer of liquid hydrogen, having built and operated a hydrogen highway across North America. Plug Power delivers a significant value proposition to end-customers, including meaningful environmental benefits, efficiency gains, fast fueling, and lower operational costs. Plug Power’s vertically-integrated GenKey solution ties together all critical elements to power, fuel, and provide service to customers such as Amazon, BMW, The Southern Company, Carrefour, and Walmart. The company is now leveraging its know-how, modular product architecture and foundational customers to rapidly expand into other key markets including zero-emission on-road vehicles, robotics, and data centers.

HevenDrones is a leader in the development and commercialization of actionable drone platforms with heavy-lift capabilities. HevenDrones proprietary stabilizing technology provides the capability to lift and move heavy and unbalanced and kinetic loads. The company believes that drones are capable of performing like flying robots across a variety of defense and commercial applications, including automating cargo logistics through development of a universal payload system. The company currently manufactures several drone platforms with heavy lift capabilities and incorporates its own hardware and proprietary operating system software into each platform design. The company was founded in 2019 and has grown significantly while achieving major performance milestones along the way. To accommodate this growth, the company recently opened an expanded headquarters in Mevo Carmel Science and Industry Park near Haifa, Israel which houses its state of the art highly automated production facility.

DroneShield Releases the 6th Edition of its C-UAS Factbook