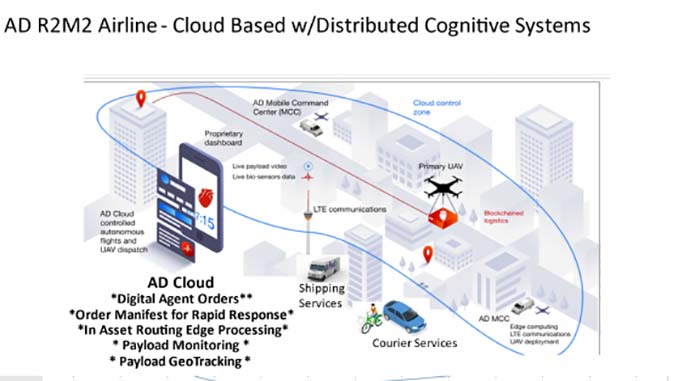 Although the commercial unmanned aerial vehicle (UAV) industry is expected to grow into a $28 billion industry by 2029, there are some business sectors that are still better served by manned aircraft, like airplanes and helicopters. That’s why Aquiline Drones (AD), an American drone manufacturer and cloud technology enterprise, has spent the past two years establishing an airline division dedicated to the timely transport of human tissue, organs, blood and other time-critical cargo. The company today announced the culmination of its extensive effort and official formation of AD Airlines after being awarded its Air Carrier Certificate by the FAA on September 16, 2021, which enables AD to commercialize its lifesaving tissue and organ delivery service.

Specifically, AD Airlines will implement its patent-pending and unique Mixed Modal Transport Model (R2M2), starting with the use of manned aircraft, and gradually incorporating drones as FAA approvals are realized. R2M2 is an Artificial Intelligence (AI)-driven transportation logistics platform supported by the AD Cloud. It uses AI algorithms embedded in AD’s cognitive agent “Spartacus’ to manage a hyper-ledger blockchain platform to optimize transportation logistics. Essentially, AD Airlines plans on using both drones and planes on its Air Carrier Certificate to provide a first-ever comprehensive solution to the human organ and tissue transplant delivery system within the medical industry.

“Every year, more than 40,000 patients die because they cannot get their life-saving organs in time. This is not due to a lack of available donated organs, but rather, a cumbersome and archaic transportation system and I can’t think of a better use and combination of AI, aviation, drone and cloud technology, other than to save lives,” said Barry Alexander, Founder and CEO of Aquiline Drones. “Between AD’s U.S.-manufactured drones, its in-house AI lab, the AD Cloud and a growing fleet of aircraft, we are on a mission to eliminate the current 20% discard rate for unused human organs and ensure that they’re physically in the hands of the transplant surgeons in time to save a patient.”

Alexander emphasizes that AD Airlines will be used exclusively to expedite and improve the current airborne delivery system for human tissue and organs in the U.S. by at least 30%, starting immediately. AD Airlines will initially focus on the Northeast region (region 11), working with organ procurement organizations (OPOs) and the Organ Procurement and Transportation Network (OPTN) to eventually expand its reach across the nation. Working in partnership with Transportation Coordinators of America (TCOA) and American Expediting, initial revenue opportunities have already been created through inbound orders.

The Northeast (Connecticut, New York, Massachusetts, and Rhode Island) is the largest organ transplant region out of the eleven designated nationwide. Hartford Hospital in downtown Hartford, CT is rising in popularity as a premiere transplant center. Hartford Hospital is also home to the LifeStar air ambulance program, which has completed over 35,000 missions and has saved thousands of lives since its founding in 1985.

Specific steps to achieve this goal include:

Alexander and notes that the recent Federal Aviation Administration (FAA)’s approval of AD Airlines has been nearly two years – amid the COVID pandemic – of solid and continuous development and incubation with the company passing the final qualification gates and review and being issued its official Air Carrier Certificate. AD Director of Operations Tom Keck led the effort in coordinating the entire Certificate development and management process.

“While there are a few other companies such as UPS Flight Forward, Inc. and Amazon Prime Air that are approved by the FAA to conduct drone delivery services, AD Airlines differs in that we are the only American drone manufacturing company with an Air Carrier Certificate dedicated to saving lives using manned aircraft with drones to follow,” clarifies Alexander. “As such, we can offer all-encompassing services, like mission planning, crew resource management, crew scheduling, crew planning, dispatch, safety management systems, maintenance control, technical publications, flight following and other crucial processes necessary for success.”

Another competitive advantage besides its new AD Airline division is the makeup of the company’s management team, which consists of fellow airline pilots, aerospace and software engineers, distinguished military personnel, including retired AF Generals, algorithmic mathematicians and other technologists. Collectively, AD brings 300-plus years of aviation knowledge and FAA experience to the burgeoning drone industry, while being supported by a network of thousands of pilots nationwide.

Additionally, AD runs its drone operation like a traditional airline subjecting its drone pilots – both employed and contractual, to similar scrutiny and training akin to U.S. airline pilots. As such, drone pilots enrolled in AD’s Flight to the Future drone pilot training program (http://www.flighttothefuture.com) subscribe to FAA-mandated drug and alcohol screening, a safety management system (SMS) and are managed through SkedFlex – an industry-leading airline crew resource management platform.

“With safety at the core of AD’s framework, combined with the exceptional speed and flexibility of our manned and unmanned aircraft, we are poised to usher in the ultimate transportation solution that will help save lives in the US and eventually, around the world!” concludes Alexander.

Interested organ procurement organizations (OPOs) and related companies are welcomed to email flights@flyadair.com or info@aquilinedrones.com for more information on partnerships and service.

DroneShield Collaborates with the US Department of Homeland Security