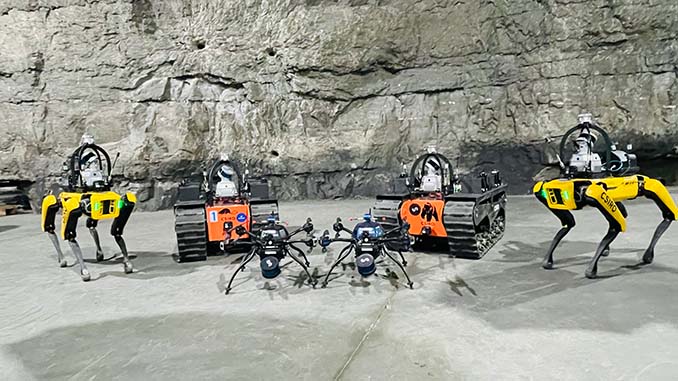 For four days, elite robotics teams from around the world gathered in Kentucky, USA to compete in the prestigious DARPA Subterranean Challenge, which has been dubbed the ‘Olympics for Robotics’. The Australian lead Emesent – CSIRO Data61 – Georgia Tech team were excited to take second place, in a nail-biting tie-breaker after scoring equal points (23) with team Cerberus.

“This is an incredible outcome and the result of many years of hard work and collaboration by our team. A big thank you to all the people who helped with this project,” said Dr Farid Kendoul, Emesent CTO and Co-Founder.

“We’re so proud of the contributions that Emesent has made in the last three years to advance the state-of-the-art in robotics and showcase the capabilities of Australian companies on a global stage. Congratulations Cerberus.”

DARPA (the US Defence Advanced Research Project Agency) is renowned for funding Grand Challenges in the areas of robotics and AI, with the aim of fostering and accelerating pioneering research. The Subterranean (or SubT) Challenge was established to push the boundaries of autonomous exploration and mapping in challenging subterranean environments where there is no GPS or communication infrastructure. These environments are typically encountered during Search and Rescue missions after natural disasters. Robots can be autonomously deployed beyond line of sight and standard communication networks to gain situational awareness without putting humans at risk.

The SubT Challenge began three years ago, and included annual events in the lead up to the a finale which was held in the Louisville Mega Cavern in Kentucky, USA. The event included circuits that combined urban, tunnel and cave environments to test robots in a variety of challenging real world scenarios. Points were scored by the robots finding items of interest relevant to Search and Rescue (such as trapped survivors, backpacks and cellphones) and correctly reporting their locations.

Subterranean environments can be dark and include narrow passages or rough terrain as well as elevated areas that can’t be accessed by ground-based robots. This combination lends itself to teams of heterogeneous robots that can work together to cover a variety of environments.

The Emesent – CSIRO Data61 – Georgia Tech team deployed a fleet of six robots, including two Hovermap-enabled drones, two tracked robots and two quadruped robots. All were equipped with the ability to explore autonomously while building a unified 3D map in real-time by sharing their local map data through a wireless mesh network which they formed. Emesent developed the autonomous drone capability while CSIRO Data61 developed the ground-based robot capability. The framework for coordination and task allocation between the robotics was provided by The Georgia Institute of Technology.

Given Emesent’s track record of developing autonomous drones to map challenging environments such as underground mines, and CSIRO Data61’s world-leading capability in autonomous ground robots, it was a natural fit to team up for the challenge. The two Brisbane-based entities were proud to represent Australia in a collaboration with US-based team member, Georgia Tech.

“This is the first time an Australian team has made it to a DARPA Challenge final, and we’re very proud to showcase Australia’s capabilities in this area on the world stage,”  said Dr Navinda Kottege, CSIRO group leader.

Although Emesent has deployed its Hovermap drone autonomy and mapping capability commercially since 2019, combining this with autonomous ground robot capability opens up a host of exciting and valuable future applications.

“Having a fleet of driving, walking and flying robots that are achieving complex missions autonomously and collaboratively is a major technological milestone and an important step towards using autonomous systems for saving lives and helping people,” said Dr Farid Kendoul.

“We’ll continue to push the boundaries of GPS-denied autonomy and mapping at Emesent and we’re excited to see this have further impact in many industries.”

About Emesent and Hovermap
Emesent’s vision is to be the World leaders in autonomous digitization of challenging, hard-to-reach places and assets. Founded in 2018, the company has since grown to more than 90 employees, with expertise in Robotics, AI, Machine Learning, and Data Analytics. Their flagship product, Hovermap, is a unique LiDAR mapping and autonomy payload which allows drones to fly autonomously in challenging GPS-denied environments to map and explore them.