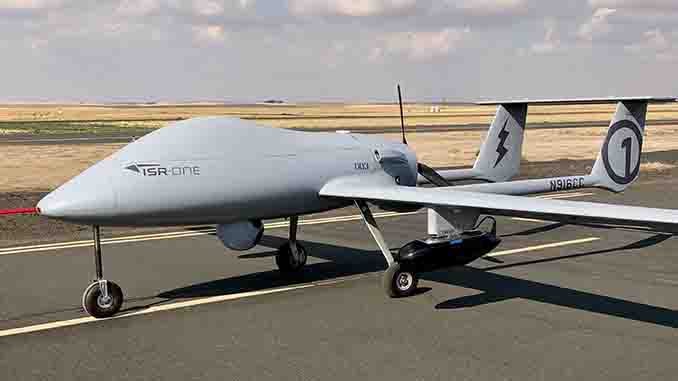 The test flights, which took place in mid-August in Pendleton, Oregon, had a BlackKite mounted on the pylon of an ISR-ONE and imaging a vast area kilometers in diameter. In surveilling so much ground with the WAMI system, Cubic’s UAS demonstrated capabilities of particular interest to U.S. Central Command, Special Operations Command, and other government users.

“We were very excited to work with Cubic on this,” said Doug Rombough, VP of Business Development for Logos Technologies. “The BlackKite pod is designed to operate from a variety of UAS, planes, and helicopters—and ISR-ONE proved no exception. All it took was connecting a few bolts and cables to turn the Cubic UAS into a formidable WAMI platform.”

Weighing less than 38 pounds, BlackKite can image an area 12 square kilometers in size—tracking every vehicle and detecting moving dismounts within that coverage zone in near-real time, day and night. At any given time, up to 10 different video “chip-outs” can be transmitted to the ground, so operators can follow unfolding events. Likewise, BlackKite records and stores imagery for use by forensic analysts.

In February 2020, Cubic announced that it had signed a cooperative research and development agreement with Special Operations Forces Acquisition, Technology and Logistics (SOF AT&L) for work on advanced airborne payloads. WAMI is one such sensor modality that has attracted the attention of the U.S. military.

“BlackKite is a great match for ISR-ONE,” said Robin Pengelly, Senior Director of Business Development at ISR Systems. “The ability to provide an unblinking eye around the clock, in a package light enough to be mounted on our aircraft alongside other electronic warfare payloads, really opens the door to true 24hr multi-INT surveillance from tactical UAS platforms.”

In the wake of a successful test flight, Logos Technologies and Cubic are now ready to demonstrate BlackKite and ISR-ONE for military customers and how the two mature technologies can support a wide range of missions, added Rombough.

Airspace Link Announces Partnership with the City of Las Vegas