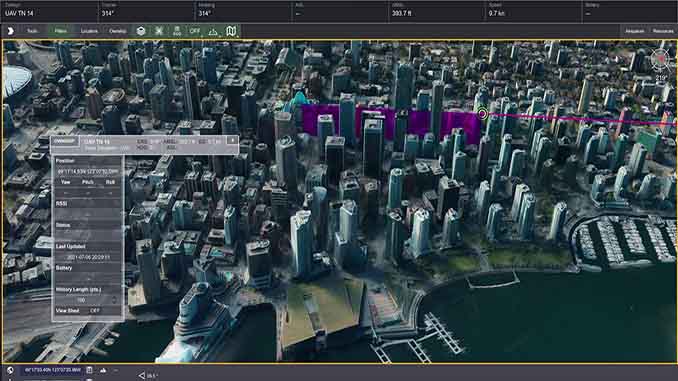 In this release of TerraLens, the product development team has focused on improving performance for 3D visualization for large viewports, and on multi-domain visualization features for Joint All-Domain command and control applications. Leveraging the power of modern GPUs and multi-core processors, the latest release of TerraLens is significantly faster, with new presentations focused on enhancing situational awareness.

With increased multithreading in its map handling, TerraLens can load and display vector, raster and elevation formats smoothly without pre-processing. This is ideal for applications that have disk size constraints or for customers that have a short turn-around time between receiving map data updates and needing to use them.

For applications with stringent start-up constraints or map formats that are not optimized for quick runtime access, the pre-processing option still exists, to help ensure minimal time for an initial map display.

The rendering of maps and dynamic presentations has also been optimized with increased threading in the graphics kernel, and the minimization of costly graphics state changes with batched rendering calls.  Improved data culling ensures that only those items that are actually visible will be rendered. These improvements are especially noticeable when displaying large numbers of dynamic tracks and objects, and frequently projected information.

This release of TerraLens also includes a slate of new tools and features. “While improving performance is a passion for TerraLens developers, we’ve also listened to the requests of our customers for newer, high impact visual presentations”, explained TerraLens product manager Annette Gottstein.

New features include support for OGC 3D Tiles, which can be used to create a high-resolution 3D view that is especially suited to cityscapes, while a new API to control the resolution of the terrain mesh allows applications to balance runtime performance with higher resolution terrain over which to drape map imagery.

Elevation warnings can now be displayed using color ramps on both terrain and OGC 3D Tiles, as well as on primitive lines and area fills.

TerraLens 9.3 also includes new Geo/WorldHeatMap classes that provide a flexible and intuitive way to perceive density of points on a map, which will give developers new ways of visualizing important data in their applications.

TerraLens continues to evolve to meet the latest map and symbology standards. Support has been added for the latest military symbology, providing MIL-STD-2525D and App-6B symbol sets.
The SDK also features new mapping updates including enhanced support to discover WMS and WMTS map layers as well as monitoring the status of web requests. Support has been added for DAFIF 8.1 and S-57 Inland ENC levels. Developers will also have the ability to track when maps have completed loading in the TerraLens viewport.


“Kongsberg Geospatial has long prided itself on the continual evolution of our TerraLens geospatial visualization SDK”, said Ranald McGillis, President, Kongsberg Geospatial.  “We’ve made a significant investment in research and development over the past few years, and we’re happy to be able make the fruits of that effort available to engineers and developers in this version of TerraLens.”

TerraLens, Kongsberg Geospatial’s industry-leading geospatial visualization platform, has been fielded in some of the most demanding applications in the world including AEGIS, Global Hawk, THAAD, NATO AWACS, and the Joint Battle Command-Platform.

Based in Ottawa, Canada, Kongsberg Geospatial (https://kongsberggeospatial.com), developer of the TerraLens Geospatial SDK, creates precision real-time software for air traffic control and UxS and situational awareness. The Company’s products are primarily deployed in solutions for air-traffic control, Command and Control, and air defense.  Over nearly three decades of providing dependable performance under extreme conditions, Kongsberg Geospatial has become the leading geospatial technology provider for mission-critical applications where lives are on the line.  Kongsberg Geospatial is a subsidiary of Kongsberg Defence & Aerospace.