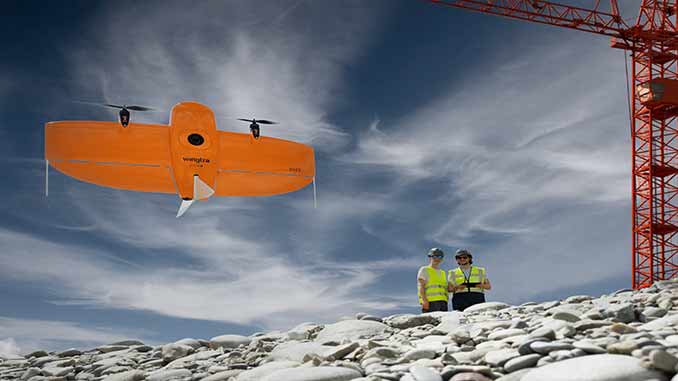 Known for its vertical take-off and landing (VTOL) precision and dependable data capture over large areas, WingtraOne has been chosen by professionals worldwide across many industries. The WingtraOne GEN II represents a solid step forward in industrialization and reliability along with some new perks that challenge the previous limits of commercial mapping drones.

“We wanted to make the WingtraOne drone even more versatile for our customers. So next to our flagship 42MP Sony RX1, we’re including new, high-end mapping payloads,” said Maximilian Boosfeld, Co-founder and CEO of Wingtra. “I’m especially excited to announce our oblique solution, which offers outstanding 3D mapping results. It’s the perfect choice for capturing infrastructure—from a single industrial plant to full-scale cities.”

“Our partnership with Wingtra unlocks new capabilities for Site Scan for ArcGIS users by allowing them to create wide-scale and accurate 3D meshes leveraging the oblique payload on the WingtraOne Gen II,” said Richard Cooke, Director of Global Business Development at Esri. “These high-resolution images processed through Site Scan produce an enriched 3D GIS for our users who require modelling of open pit mines, accurate construction updates, creation of digital twins for cities, and more.”

WingtraOne GEN II further features PPK integrated on every drone, including multispectral Altum and RedEdge payloads, as well as advanced fail-safe and self-diagnosis algorithms and services for dependable operations.

“We have studied over a 100’000 flights and all incoming customer reports to understand what the limits might be so we can push them further,” said Julian Surber, Product Manager at Wingtra. “As a result, we’ve designed many reliability tools for GEN II to guarantee uninterrupted operations.”

Wingtra’s engineering team has completely redesigned the electronics of the GEN II. From the more powerful onboard computer and optimized PCB designs, to a new navigation and heading unit developed in-house, GEN II components are meant to provide industry-leading reliability to customers.

Beyond the reliability ensured by hardware updates, the GEN II runs through health-monitoring algorithms for motors, servos, batteries, camera, PPK and onboard sensors. These “drone health self checks” minimize the potential of flight  with unsafe equipment.

Precision agriculture applications will get a boost from GEN II, since Wingtra’s top-of-the-line multispectral payloads, namely Micasense Altum and RedEdge, will now be paired with high-accuracy PPK. Specifically, PPK improves the quality of multispectral insights for use cases such as irrigation management and prescription maps for pesticides.

“So when you’re aiming for the highest detail orthophotos, point clouds, NDVI maps and digital surface models across the majority of your applications, you only need one drone. And that drone is WingtraOne Gen II,” said Boosfeld.

“With GEN II, we’re marking a key point in commercial drone evolution by providing you with a reliable workhorse that you can count on over every flight,” added Surber.

Headquartered in Switzerland, Wingtra is the world’s leading VTOL drone producer for mapping, survey, construction and infrastructure, and mining industry professionals. Since its market entry in early 2017, Wingtra has partnered with more than 70 of the biggest GIS equipment dealers and has been selling mapping drones globally, with a growing reach. The WingtraOne GEN II drone is based on years of engineering research and cumulative insights from data collected over more than 100’000 flights. Wingtra employs more than 80 people all over the world, with offices in the US, Eastern Europe, Asia and Latin America. Wingtra’s customers are flying drones on all continents, excluding only Antarctica. Learn more at wingtra.com.