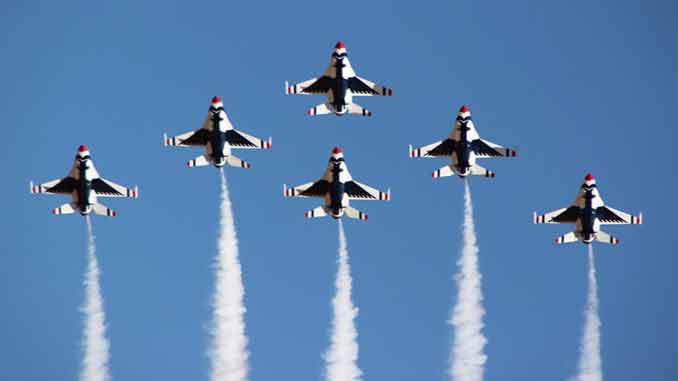 Organizers today announced the launch of The Thunder & Lightning Over Arizona Air Show, which is scheduled for Nov. 6-7, 2021 at Davis-Monthan Air Force Base in Tucson, AZ. The show was initially scheduled for April 24-25, 2021 but was rescheduled to the later dates due to COVID restrictions in place at the time.

The U.S. Air Force Demonstration Squadron “Thunderbirds” will headline the show in their first appearance at Davis-Monthan in more than two years. The show is free and open to the public; however, a limited number of
premium seating options are available now for purchase at www.ThunderAndLightningOverArizona.com.

The Thunderbirds are one of the most popular air show demonstration teams in the world and their 2019 demonstrations at Davis-Monthan drew more than 150,000 spectators. The pride of the U.S. Air Force, the Thunderbirds, fly six F-16 Fighting Falcons in formations as close as 18 inches of separation.

“We are very excited to bring the Thunderbirds and a world-class air show back to Tucson,” said Maj. Charles Cole, Director of the Thunder & Lightning Over Arizona Air Show. “We are also excited to open up Davis-Monthan to
our local community and give them an opportunity to meet members of our armed services and share with them the important role our base serves in our nation’s defense and in our community.”

The U.S. Air Force A-10 Thunderbolt II remains a reliable workhorse that continues to provide important close air support and combat search and rescue around the world. Davis-Monthan serves as home to more than 80 A-
10’s as part of the 355th Wing. The U.S. Air Force F-35 Lightning II, a fifth-generation fighter is one of the most sophisticated aircraft in the world today, and the U.S. Air Force C-17 Globemaster III, is the most flexible cargo aircraft

Additional performers and a robust list of static displays will be announced as they are confirmed. Performers and aircraft are subject to change without notice.

Admission to the air show is free but there are several premium seating areas, including the exclusive “Thunderbolt Club” with a limited number of tickets available for purchase while supply lasts. Additionally, corporate partnership opportunities are still available for companies and organizations seeking upscale hospitality options, branding opportunities and on-site exposure. Tickets and more information about partnership are now available
at www.ThunderAndLightningOverArizona.com.