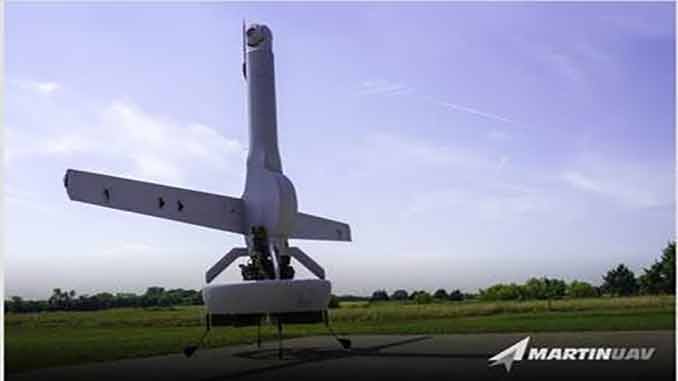 Martin UAV, a leading Unmanned Aircraft Systems (UAS) manufacturer, will for the first time publicly unveil its V-BAT 128 aircraft — recently selected by the U.S. Navy for a prototyping and development program — at the 2021 Sea-Air-Space Conference in National Harbor, Maryland, from August 2 through August 4.

The V-BAT 128 is ideally suited for a wide array of sea, air and land missions. With its innovative, near-zero footprint vertical takeoff and landing (VTOL) and long-endurance capabilities, the V-BAT 128 is unlike any unmanned aircraft system (UAS) on the market. Its design makes transportation and rapid tactical deployment easy and safe. It can be assembled by two personnel in less than 30 minutes, and the aircraft’s duct fan propulsion design eliminates exposed rotors.

Martin UAV is currently enhancing and customizing the V-BAT 128 for the Navy, reflecting the firm’s responsiveness to the military’s mission requirements and the UAS industry as a whole.

“We’re pleased to have the opportunity to participate in the Sea-Air-Space Expo, so we can officially unveil the V-BAT 128 model to the defense industry and key decision-makers,” said Ruben Martin, owner and CEO of Martin UAV, and recently elected Chairman of the Board for Mercy Ships International. “We continue to push the boundaries of what’s possible and are proud to offer UAS technology that serves a broad range of mission needs.”

In April, the Navy awarded Martin UAV’s V-BAT for a VTOL UAS prototyping and development effort in order to fulfill new technological requirements driven by the changing nature of threats in austere operating environments.

Martin UAV was one of 13 respondents to the Navy’s Mi2 Challenge and was later selected with L3Harris Technologies to compete in a technology demonstration at the Yuma Proving Grounds in Yuma, Arizona. Defense industry media noted Martin UAV was an underdog winner in the challenge.

At Yuma, the V-BAT 128 demonstrated its “hover and stare” and high-endurance capabilities and its automatic transition to straight and level flight. The V-BAT 128 also features open architecture and the capability to carry interchangeable payloads.

The 2021 Sea-Air-Space Conference will include informative educational sessions, important policy discussions, and a dynamic exhibit hall floor. Online corporate sessions and exhibits will be accessible through the Sea-Air-Space mobile and desktop app and also will feature Zoom integration for face-to-face visits.

Martin UAV will be at Booth #414 to officially unveil the V-BAT 128 and invites you to visit the Martin UAV events page to register for the conference. For more information about Martin UAV, visit martinuav.com.

Martin UAV is a private, advanced-technology company based in Plano, Texas. The company specializes in building wholly unique, unmanned aircraft systems and associated flight control software. The company’s systems are commercially developed to fill critical operational needs in tactical and confined operational environments. Its V-BAT series aircraft is the only single-engine ducted fan VTOL that has the ability to launch and recover from a hover, fly over 11 hours in horizontal flight and make mid-flight transitions to “hover and stare” at any time throughout a given mission set. To learn more about Martin UAV, visit www.martinuav.com.