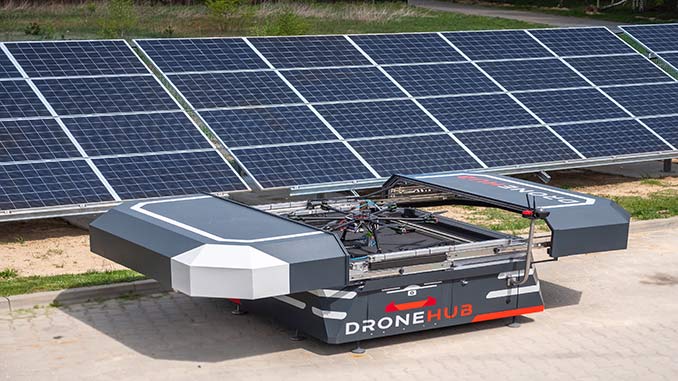 The Dronehub company – a European leader in drone-in-a-box solutions – has become a member of the Global UTM Association (GUTMA), the non-profit consortium of worldwide Unmanned Aircraft Systems Traffic Management (UTM) stakeholders. The collaboration will strengthen the industry’s efforts to increase the scalability and harmonization of drone-in-a-box technology in the global sky. Dronehub is the only company from the drone-in-a-box sector and currently, the only Polish member of the association.

“Joining GUTMA is a confirmation of our global aspirations and willingness to contribute to the global ecosystem of the drone industry. We join GUTMA as a partner who, on the one hand, will gain knowledge and experience from other members, but on the other hand, will strengthen the association by sharing its innovative solutions and pioneer approach. It is a big thing that we will be in daily working contact with companies such as Airbus, Boeing or Verizon”, says Vadym Melnyk, Dronehub founder and CEO.

The cooperation will strengthen the activities of the drone industry, the aim of which is to increase the scalability and harmonization of drone-in-a-box technology in the world. Dronehub is the only company in the drone-in-a-box sector and has become the Association’s only Polish member.  GUTMA representatives come from 32 countries worldwide.

“GUTMA expends its interoperable UTM systems know-how also through its members. We are delighted to welcome a state-of-the-art company that leads the drone-in-a-box sector,” states Koen De Vos, GUTMA Secretary-General. “Our cooperation with Dronehub will allow our association to continue to innovate and strengthen the global UTM ecosystem”.

In mid-June, Sebastian Babiarz, representing Dronehub, was elected for a second term as a co-president of GUTMA.

“Joining GUTMA is an important element of our expansion strategy into EMEA markets. I am convinced that GUTMA, as an important stakeholder in the global ecosystem, will be a development spring for us and will allow us to operate even more effectively on European markets”, says Sebastian Babiarz, Dronehub Vice President of Business Development and GUTMA co-president.

Dronehub is a European leader in comprehensive drone-in-a-box solutions, which include drones, drone infrastructure and AI-powered software. It is the only manufacturer in the world that offers monitoring, inspection and measurement system, cargo transport system and mobile ground infrastructure. It is also the world’s first and the only European producer of a docking station with automatic battery replacement in a drone. Thanks to this innovative solution, drones can perform missions 24/7 without human intervention.

Dronehub is the official partner of IBM, as the only drone manufacturer in Europe. The company cooperates with the European Space Agency and the European Defense Agency. Dronehub’s portfolio also includes cooperation with local and international companies such as PKN Orlen, Deutsche Bahn or Hubraum T-mobile.