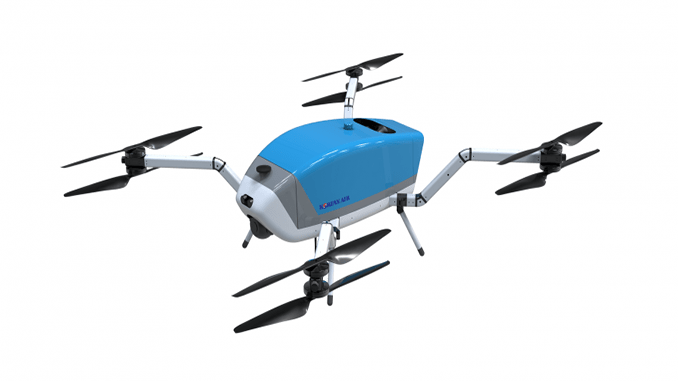 Korean Air will supply two of its new hybrid unmanned vehicles for a firefighting drone project on Jeju Island, one of Korea’s most popular vacation spots. The Jeju Fire Safety Headquarters has signed an agreement with the airline to provide drones to monitor accident and fire sites in real time, search for missing people in areas difficult to access by a rescue team, and to monitor remotely for accident prevention.

The hybrid drone that Korean Air has been developing since 2016 features an engine that combines internal combustion with battery power. It enables a maximum two-hour flight time compared to the 30-minute flight time of existing battery-powered drones. To carry out its flight mission in varied weather conditions, the hybrid drone has been upgraded to fly at altitudes of up to 500 m, speeds of up to 72 km/h, and in temperatures between -20℃ to 45℃. In addition, its enhanced wind resistance of 14 m/s is especially suitable for Jeju Province, where the winds are strong.

The drones (KUS-HD-NEO21) will feature reduced flight preparation time and enhanced operational convenience with upgrades such as folding arms and a superior fuel tank. High-resolution images can be transmitted in real time to verify a site anytime and anywhere with electronic optical (EO) and infrared (IR) cameras.

Korean Air has been recognised for supplying hybrid drones to the city of Busan and the Korean Navy and Air Force. The airline is marketing this new model to drone users such as the Korea Forest Service, police departments, power plants, other government agencies as well as overseas markets. Korean Air is a leader in the UAV (Unmanned Aerial Vehicle) industry and has been developing MUAV (Medium Altitude Unmanned Aerial Vehicle) for intelligence, surveillance and reconnaissance (ISR), unmanned ISR aircraft with vertical take-off and landing (VTOL), long endurance hybrid drones, and autonomous swarming drones. In addition, the airline is investing in total solutions for UAVs and plans to use such solutions in the burgeoning Urban Air Mobility (UAM) industry.