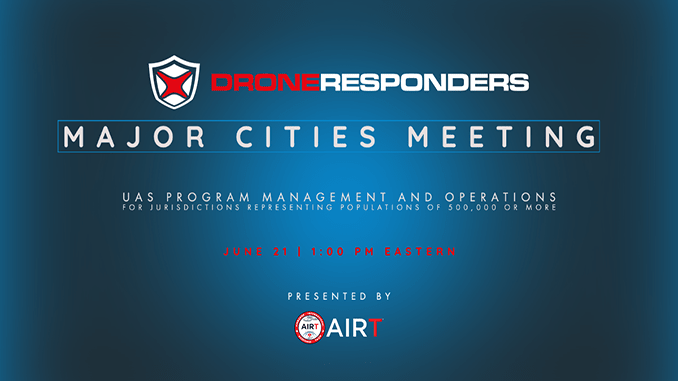 The Airborne International Response Team (AIRT), the leading 501(c)3 non-profit organization supporting the use of unmanned systems for public safety and disaster response – and official home of DRONERESPONDERS® – has announced the next meeting of the DRONRESPONDERS Major Cities Working Group, which will be held virtually on Monday, June 21 at 1:00 p.m. Eastern.

Leo will lead the June meeting which will focus on the following topics:

“As we have discovered at FDNY, public safety agencies operating drones and other unmanned systems in urban environments face unique challenges that often require additional problem solving,” said Leo.  “The goal of the Major Cities Working Group is to share knowledge and experiences between agencies to help other first responders avoid pitfalls and achieve mission success.”

After June 21, the next meeting of the DRONERESPONDERS Major Cities Working Group will be held in-person on Monday, August 16 at the DRONERESPONDERS Global Public Safety UAS Summit at AUVSI XPONENTIAL at the Georgia World Congress Center in Atlanta, Georgia.

About AIRT
Based in Miami, Florida, AIRT® (Airborne International Response Team) is the leading 501(c)3 non-profit organization supporting the use of unmanned systems for public safety and disaster response.  AIRT offers a wide range of educational programming, training events, and mission-critical deployments in support of public safety UAS operations and designed to help people prepare for, respond to, and recover from complex emergencies and major disasters.  AIRT is the official home of DRONERESPONDERS®.  For more information, visit: http://airt.ngo or http://droneresponders.org