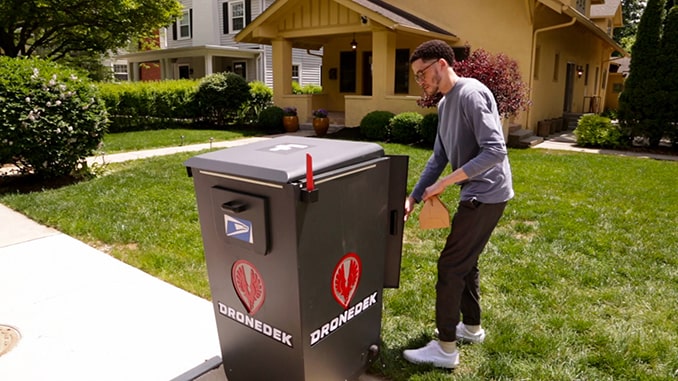 “We are consolidating all delivery to one point, including robotic, unmanned-driverless vehicle, aerial drone and conventional delivery, with our platform-agnostic safe, secure, smart mailbox,” said founder and CEO Dan O’Toole.

Along unveiling its first unit upon request, DRONEDEK will offer demonstration opportunities to interested media and drone tech supporters in Hamilton and Marion counties in Indiana in July. It will deliver food to golfers at the Lakes of Taylor Golf Club in suburban Detroit in August.

“We’re also in active discussions to pilot medicine delivery in Ghana and Africa,” O’Toole said. “And, just for fun, DRONEDEK will be featured in a new movie called Charge it to the Game where our mailbox will be used for characters to receive deliveries of Nike shoes and BLK Water.”

O’Toole said cities and towns across the world are eager to be among the first to take advantage of the cost and time efficiencies drone technology offers. “We’re just as eager to show off the product,” he added. “This is next generation tech, and we are working hard to develop infrastructure as well as working partnerships with major logistics companies and municipalities.”

DRONEDEK was issued its first patent in 2017 and its second patent for its smart mailbox in 2019. DRONEDEK has four additional patents under examination with the USPTO. In all, DRONEDEK has filed for or been awarded 111 patent claims.

To date, DRONEDEK has raised more than $3 million in capital raises and via the Wefunder platform where it has earned the distinction of being the highest valuation, pre-revenue company to ever successfully crowdfund since the inception of crowdfunding.

With recent shifts in the FAA’s stance on drone delivery, it is more apparent than ever that this technology is becoming more commonly used. Drone delivery is currently happening in Christiansburg, VA, by Google Wing. The 22,000 population city, has seen nearly 95% of is residents have a first-hand experience with drone delivery, of which there is an 87% positivity rating. Additionally, drone delivery is 92% more efficient than conventional delivery, which will substantially reduce traffic and greenhouse gasses.

More than 1.7 million packages are stolen daily from porches and yards at homes and businesses across the country, an action DRONEDEK mailboxes will prevent as it disrupts mail and package delivery for the first time since 1858.

To partner with DRONEDEK or to learn more please visit DRONEDEK

No Replies to "DRONEDEK Delivering on Promise of Smart Mailbox"