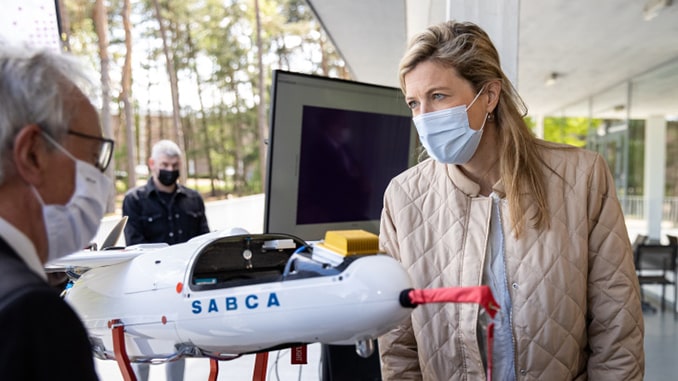 The Belgian nuclear research centre, SCK CEN, and the Belgian aeronautical specialist, Sabca, have developed an innovative technology that enables drones to be used to carry out radiological measurements. The measuring equipment was officially attached to the drone on Tuesday 18 May 2021, in the presence of the Minister of the Interior, Annelies Verlinden. “Innovative projects with the aim of improving the protection of the population, the environment and collaborators have my full support,” said Minister Annelies Verlinden.

Whether they are used for the monitoring of cereal crops, for inspecting sewers and electricity grids or for transporting medicines, drones are conquering the business world, now that increasing numbers of innovative drone applications are available to support business operations. Very soon, the nuclear sector too will be able to rely upon the assistance of these unmanned aircraft. The drones will be used as part of the monitoring programme, or during decommissioning projects or emergency planning, to carry out radiological measurements without any human intervention. “And that will result in a significant step up in terms of radiation protection,” says Eric van Walle, the Director General of SCK CEN. Minister Annelies Verlinden is also excited about the introduction of the drones. “This project is the result of a public-private partnership between SCK CEN and Sabca. The drones will be first used as a preventive measure to study areas for potential radioactive contamination. We are also preparing for possible remediation. Thanks to the detector attached to a drone, measurements can be performed during crises without any human intervention. This maximises the protection of collaborators.”

But how does that work in specific terms? A scintillation counter is attached to the drone. “The device measures radioactivity by counting flashes of light caused by the influx of ionising radiation, which in turn indicates the magnitude of the radiation dose. The more light, the more radiation,” explains Johan Camps. According to the scientist, the major benefit of drones lies in their flexibility. “Drones allow us to chart every last nook and cranny, which is something we cannot achieve using measurements carried out by hand or from a helicopter. In contrast to traditional measurement techniques, the information is actually already being received while the drone is still in the air. We therefore receive information in real-time from a larger number of specific locations.”

The project would not be possible without the state-of-the-art drone technology of the Belgian aeronautical specialist, Sabca. Sabca provides two types of drone – a fixed-wing drone that can hover autonomously in the air for hours and the multicopter, which can carry heavier detectors without sacrificing flexibility. “Sabca offers solutions that comply with the most stringent standards in the aeronautical industry, where safety is always the primary consideration. We can then make use of that expertise when carrying out complex missions in challenging conditions. As far as performing missions in challenging conditions is concerned, Sabca is trialling the transportation of medical samples above cities, the inspection of wind turbines at sea and the integration of drones within commercial airspace. We’re extremely pleased that our technology can now be of service to the nuclear sector,” says Thibauld Jongen, CEO of Sabca.

The detectors were designed not to exceed the maximum payload, while retaining the highest possible sensitivity of measurement. “The ‘payload’ is the mass that the drone is able to transport, not including the components of the drone itself. It is important not to exceed that limit, as that could otherwise reduce the drone’s flying capabilities. That was why we made sure that our detector is made to measure,” concluded Camps.

Each of the project partners emphasises the fact that this a demonstration project with which they aim to show how drones can be used and what benefits they offer. The partners are already convinced that use of drones will enable the nuclear sector to perform precise measurements across extensive areas. Those measurements will be indispensable for the purpose of characterising forms of radiation and carrying out the radiological monitoring of nuclear sites and their surroundings. Will the use of drones therefore become standard practice? As if to temper people’s expectations, the project partners’ response was “We have to be sure we can walk before trying to run.” “The first thing we have to do is to further hone the technology, but who knows… Once we’ve refined their use, maybe drones will come to form an indispensable part of monitoring programmes and decommissioning projects.”

No Replies to "Drones carry out high-precision radiation monitoring"