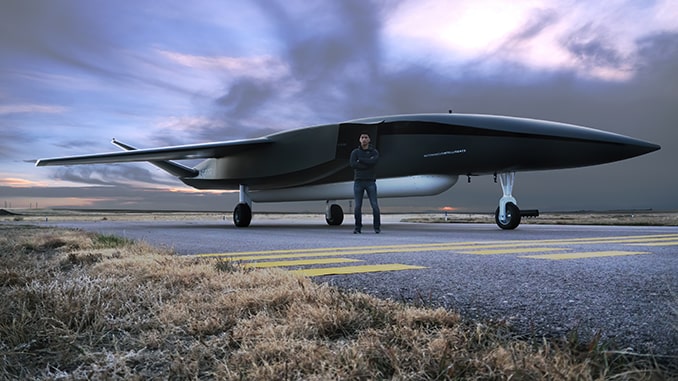 Aevum, Inc., a provider of autonomous transport services, which includes its space launch business, announced today the issuance of its US Patent No. US10994842, Adaptive Autonomous Aircraft System with Modular Payload Systems on May 4, 2021.

Five years old as a company, Aevum only recently came out of stealth, announcing its space launch services in 2019. Within six months, Aevum had won nearly $1 billion in publicly announced contracts from various customers, including from the US Department of Defense. “Finally, with the issuance of this patent, Aevum can accelerate the rollout of our launch, air cargo, and drone delivery services – and talk about them,” said Jay Skylus, founder and CEO of Aevum. “Aevum’s services will integrate into the current logistics infrastructure and increase the last-mile capabilities, expand serviceable areas, and add space launch service offerings of already successful logistics giants. We’re pretty good at the science in space [launch], but when it comes to unprecedented efficiency, I wanted to enable the industry giants. This is what Aevum’s patent has just accomplished – these logistics leaders can deliver to space for you now.”

Aevum’s business model includes partnering with current ecommerce and logistics providers as well as providing its autonomous transportation, software, and technologies as a service. Aevum’s patented technology enables the expansion of existing logistics infrastructure into the space domain, additional hub nodes and spokes in the distribution paradigm, and dynamic destinations – as opposed to static destinations using physical addresses – to cover destinations that previously weren’t economically possible, including space destinations in orbit. “What we’ve patented is the next layer and large batch of connections in the global logistics infrastructure. Space logistics shouldn’t be separated from logistics that already exist,” said Skylus. “A single Ravn X will be capable of moving millions of different things, which vary in mass, size, functionality, etc., from point A to B, both around the world and into space, simply by swapping out the type of payload module it carries on its belly.”

Aevum’s unmanned aircraft system (UAS), Ravn X, is the largest drone in the world, by mass. It has a gross takeoff weight of 55,000 lbs., roughly 25,000 kg. All it requires for takeoff, be it for space launch and now for air transport, is a mile-long runway, a hangar and regular jet fuel. With its fleet of autonomous vehicles, Aevum will offer scheduling of precision, express deliveries, ordered from a computer or mobile phone via Aevum’s Space Portal ℠, in as fast as 180 minutes for launch, without risk to human lives.

Aevum is also tackling asset utilization in space launch and air cargo with unprecedented efficiency. Assuming that a typical reusable booster flies approximately 16 minutes per launch mission, at a single launch per month, the best reused rocket boosters see no more than 4 hours of total flight time in a year, leaving these expensive assets sitting around underutilized for well over 8,000 hours annually. On the other hand, the most efficient air cargo companies will utilize their planes up to 15 hours per day, 5,475 hours annually. Aevum’s UAS fleet will run nearly 24/7 year-round giving new depth to reusability. “In my company, what matters is asset utilization. For any reusable flying machine, it doesn’t generate revenue on the ground. My machines will fly around the clock, every day, ” said Skylus.

For any logistics provider, two major expenses include the cost of labor and fuel. Aevum’s autonomous transport distribution paradigm reduces labor costs by 90% and fuel costs by flying direct to more destinations. Aevum is able to air transport direct to more destinations because its cargo capacity per flight is 15,000 lbs., comparable capacity to an 18-wheeler traveling by road, which can be filled and distributed outside of the classic hub-spoke distribution paradigm. However, Aevum’s Ravn X moves cargo at 600 mph, over 10 times faster than an 18-wheeler. “The 15,000 lbs cargo capacity per flight is low enough to enable the company to offer a minimum allowed package size and weight that makes air delivery services affordable to consumers – not just large corporations and government, ” said Skylus.

Unique to the autonomous distribution model and its patented technology, Aevum will open air cargo transport options to rural and underutilized markets, which could have significant economic implications for regional airports, smaller job markets. In addition to this expansion of serviceable destinations, Aevum will begin its personal delivery services through its patented drone module. The company’s Ravn X, with the drone module attached, can carry up to 264 smaller drones, each carrying individual packages and weighing up to 55 lbs. The Ravn X will then fly up to 14,000 feet in the air, just outside of a city center, and air release the smaller drones. Deploying them from a higher altitude than current last-mile technologies, Aevum utilizes gravity and basic physics to give the smaller drones significantly farther range, truly kicking off the personal delivery market.

“Imagine if you could get your package delivered when rounding the corner on your walk to work,” said Skylus. “As you approach the corner, Aevum’s app will notify you that your package is inbound. You turn the corner, and an Aevum drone gently sets your package in front of you. Deliveries are no longer limited to physical addresses. If you’ve got a smartphone, we can deliver to where it’s most convenient to you.”

“After setting the package down in front of you, our package drone flies away to an Aevum-designated collection location, likely an underutilized space like the rooftops of city buildings. Then, Aevum’s mobile app will notify gig workers about retrieval, charge, and deploy tasks. So, if you’re good at collecting, charging, and deploying scooters, look out for Aevum’s package drone tasks!”

In 2020, Aevum posted a seven-figure profit. The company is still on track for its first launch with the U.S. Space Force. Aevum continues to grow a global customer manifest of both commercial and government contracts.