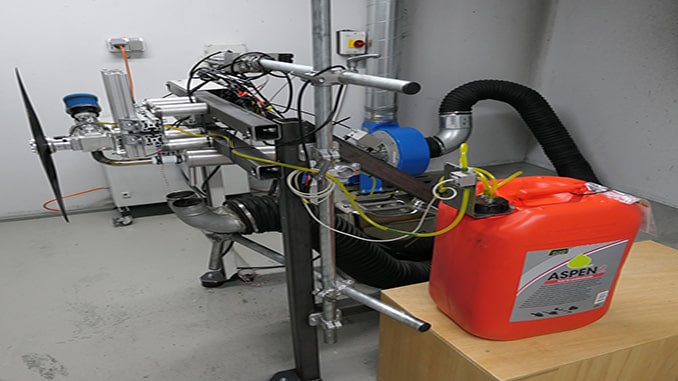 Propulsion systems in unmanned aerial vehicles (UAVs) must function reliably. Since the engines are the primary mission-critical component of a UAV, it is important to prove their reliability. This is increasingly demanded by the industry from engine manufacturers. Sky Power GmbH therefore tested its SP-55 TS carburetor engine to demonstrate its endurance and reliability using a high stress running profile per FAR33.

“After a test period of 150 hours, as well as another 30 run-in hours prior to testing, the SP-55 TS successfully completed the test,” Karsten Schudt, Managing Director of Sky Power GmbH, looks back on the test. Prior to starting, various objectives were defined that were to be achieved with the endurance test. These included load limit and endurance data. At the same time, the airworthiness of the engine was proven and documented by Sky Power qualifying reliability against defined FAA standards. “And, of course, we wanted to collect data to further assess product operating limits, maintenance schedules, and hourly operating costs as they relate to the product life cycle,” says Schudt, describing the test objectives.

The SP-55 TS is an air-cooled, 2-stroke, single-cylinder engine, with a displacement of 55 cc (10.37 cu in). The engine uses Sky Power electronic ignition and a Walbro HDA6A carburetor for fuel delivery. The fuel used in the test run was unleaded gasoline, in four different versions, at a 50:1 oil premix ratio. Engine power is 3.07 kW (4.18 hp) at 6500 rpm. The engine is designed for a direct-drive propeller in a thrust or tug configuration.

The test setup was performed on Sky Power GmbH’s stationary engine test stand. Testing was conducted according to a specified maximum temperature and speed profile for approximately 8 hours per day until a prescribed test duration of 150 hours was achieved. “In addition to component hours, engine telemetry, environmental conditions and fuel consumption, all test results were documented, evaluated and summarized in a test protocol,” Schudt said.

At the end of the daily test cycles, the engine was subjected to an inspection based on a checklist to detect changes at an early stage, document them and rectify them if necessary. After 150 hours, the engine was removed from the test stand and subjected to a full. “The engine demonstrated the reliability
we expected in the test. Nevertheless, we also gained new insights, such as the use of different fuels. For example, blending Aspen two-stroke fuel mixture with Shell V Power or Total Super Plus achieved the best results in terms of reducing deposits on the piston and cylinder. The maintenance intervals we specified also proved to be optimal,” explains Schudt.