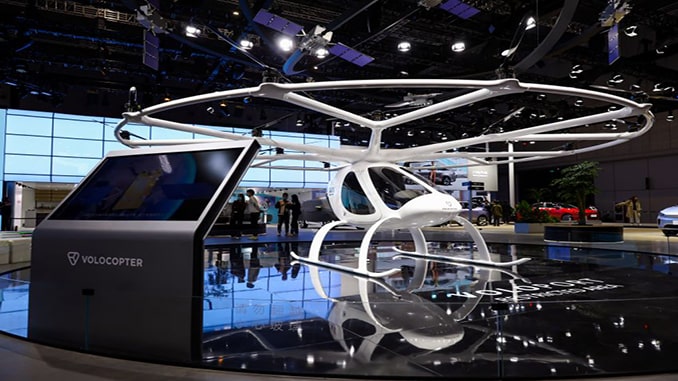 Today, the pioneer of urban air mobility (UAM), Volocopter, and the global mobility technology group, Geely Technology Group, presented Volocopter’s electric air taxi, the 2X, for the first time in China at Geely’s booth at the Shanghai International Automobile Industry Exhibition 2021. The companies are highlighting their cooperation and aim to introduce urban air mobility to the Chinese market and give visitors the chance to learn more about this new form of transport.

Urban air mobility (UAM) is an emerging part of the aviation industry focused on aerial connectivity in and around cities. As a pioneer of electric vertical take-off and landing (eVTOL) air taxi technology, Volocopter has paved the way for creating the ecosystem needed to provide electric air taxi services within cities around the world. Together with Geely Technology Group, Volocopter is beginning the process of introducing these mobility services in China and creating a scalable model for production and operations.

Since announcing Geely’s strategic investment in Volocopter in 2019, the companies have been using their combined expertise in mobility to identify where electric air taxi services could be best introduced in China.

“Geely’s market leadership in China and forward-thinking approach to expanding mobility options make them a great strategic investor. They are an invaluable partner for bringing urban air mobility to China – one of the most promising markets for the UAM industry globally,” says Florian Reuter, CEO Volocopter.

Volocopter and Geely Technology Group have agreed to enter a joint venture to make UAM services in China a reality and already applied for a business license. Public awareness is one of the key factors to successfully introduce this new mobility concept. Volocopter and Geely Technology Group are presenting the full-size Volocopter 2X for the first time in China at Geely’s booth at the Auto Shanghai 2021 to show the concrete value electric air taxi services will provide.

“Volocopter is the pioneer and leader of safe, sustainable, and practical eVTOL solutions for air taxi services in cities around the world,” says Charlie Jing, CEO of Aerofugia, a subsidiary of Geely Technology Group. “Together, we will have both the technology and means of production to launch urban air mobility ecosystems in Chinese cities.”

Volocopter 2X is known for its safety and exceptionally low noise emission. The aircraft has nine exchangeable batteries powering 18 rotors. This design gives the system a remarkably high redundancy, ensuring that even if one or several rotors fail, the aircraft can land safely. Furthermore, the smaller rotor blades are a significant feature for the low and agreeable Volocopter sound signature. Its low buzzing resembles the sound of a beehive. Flying at a height of 100 m, one will not be able to hear it at regular street noise levels.

In 2019, the Volocopter 2X successfully flew over Singapore’s Marina Bay and showed that piloted electric air taxi integration in air traffic management (ATM) and unmanned traffic management (UTM) was possible. Today, the two-seater model, which has previously flown several test campaigns, represents the electric air taxi vision Volocopter and Geely Technology Group aim to introduce in China. For future services, Volocopter will be using their fifth-generation aircraft, the VoloCity, which is currently in the certification process with European Aviation Safety Agency (EASA). It will have an increased speed of 110 km/h and longer flight duration of 35 minutes (after accounting for reserve battery and headwind).

Founded in 2011 by Stephan Wolf and Alexander Zosel, Volocopter has 300 employees in offices in Bruchsal, Munich, and Singapore. The company has raised a total of €322 million in equity. Volocopter‘s investors include Daimler, Geely, DB Schenker, BlackRock, and Intel Capital amongst others.

Geely Technology Group is an innovation-driven group, focusing on corporate investment and operation. As a corporate investor and operator in MaaS technology sector, the Group has built a diversified “6+X” business portfolio. “6” refers to the Group’s major business unit which covers Light-weight Material Technology, Battery Swapping Ecosystem, Energy Technology, General Aviation, Commercial Aerospace, and Motorcycles. While “X” refers to the incubation of tech sector enterprises which could possibly become new giants in the future.

Currently, the Group has invested in and operates 32 subsidiaries enterprises, manages over 130 billion RMB in assets, has total valuation over 170 billion RMB, and employs more than 28,000 employees. The Group subsidiaries provide high-quality products and services around the world.

Geely Technology Group has made significant investment in general aviation with Aerofugia being the key platform to carry out related businesses. As a leading solution provider and operator with strong engineering, manufacturing and service capabilities, Aerofugia has earned its reputation and name in the high-tech general aviation industry.