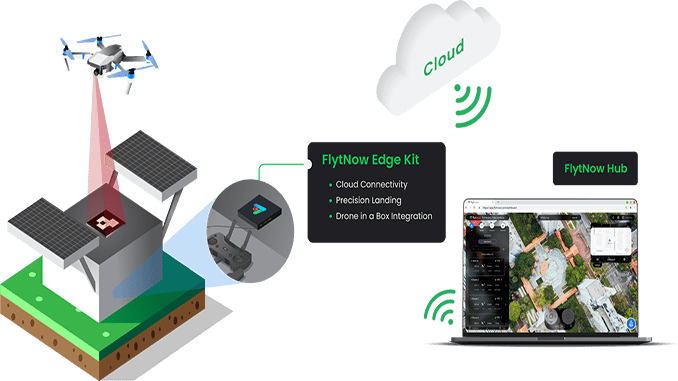 Autonomous drone technology is becoming mainstream with COVID-19 fuelling its rapid adoption. It turns out that, in order to achieve complete operational autonomy, a drone-in-a-box solution is essential. However, to safely operate a drone-in-a-box without human intervention, the most critical factor is the accuracy of the drone landings i.e. the ability of a drone to precisely land on the box for autonomous charging or battery swap. For
drone box manufacturers who seek to leverage reliable and cost-effective off-the-shelf drones such as the DJI Mavic Series, solving this piece of the technology puzzle is the key to commercial success.

While the DJI Mavic drones come with a built-in precision landing capability, several studies & customer stories show that it may not always work as expected. Without an adequate level of performance reliability, this precision landing capability is not of much value for a drone-in-a-box
solution, where a failure rate of even one in a hundred landings (fail: drone lands outside the box) is unacceptable.

To help address this critical challenge, FlytBase has released an all-in-one ‘FlytNow Edge Kit’ as a part of its FlytNow offering. Compatible with all major docking stations, this plug & play hardware device is pre-loaded with the software to enable highly reliable precision landing for DJI Mavic series of drones. It further connects the drone to a cloud-based software dashboard (FlytNow Hub) to enable fully-automated remote operations for a fleet of drones.

The FlytNow Edge Kit consists of the precision landing software module which uses computer vision technology and landing algorithms to precisely align, approach, and land DJI drones in the box. With centimeter level landing accuracy, the software module has been designed to ensure
reliability and success of drone landings, every single time. The module has been optimised to reduce the time of landing and to minimize battery depletion. Advanced failsafes, such as a designated alternate safe landing spot, audio alerts and recovery algorithms help manage the uncertainties that may arise due to strong gusts of wind or adverse weather conditions. Users of the FlytNow Edge Kit also have the flexibility to define the size of the landing zone and the height at which precision landing is triggered, based on the dimensions of the drone-in-a-box hardware.

Tested across thousands of automated landings, the module is being used by FlytBase customers and partners to enable fully-automated drone flights for a range of applications. The following timelapse video (uncut) of 20 consecutive drone landings executed via FlytNow’s cloud dashboard demonstrates the reliability and robustness of the precision landing module. The size of the landing platform used in this video is 17 inches x 16 inches (~ 43cms x 40cms). The landing zone on a typical docking station is at least two times the size of this platform.

With FlytNow Hub, users can also pre-schedule missions, integrate various payloads such as thermal cameras, loudspeakers, spotlights and other third-party applications, such as, VMS systems for incident response & UTMs for airspace awareness.