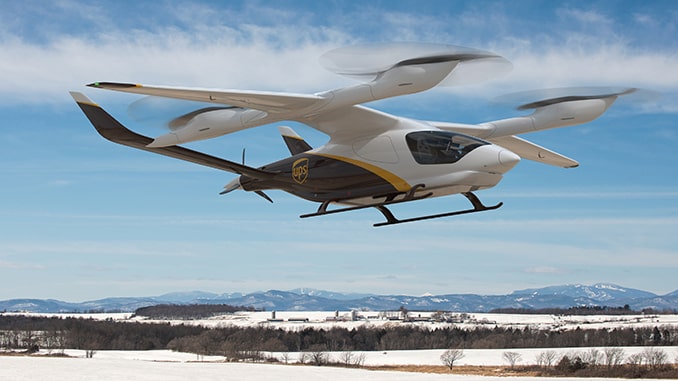 UPS, together with its UPS Flight Forward subsidiary, plans to purchase electric Vertical Takeoff and Landing (eVTOL) aircraft from Beta Technologies (BETA) to augment its air service for select small and mid-size markets. These aircraft will take off and land on-property at UPS facilities in a whisper-quiet fashion, reducing time-in-transit, vehicle emissions, and operating cost.

The BETA aircraft’s 1,400-pound cargo capacity is ideally suited to more quickly and sustainably transport time-sensitive deliveries that would otherwise fly on small fixed-wing aircraft. UPS’s use of the aircraft will benefit healthcare providers, thousands of small and medium-sized businesses, and other companies in smaller communities. With a 250-mile range and cruising speed of up to 170 miles per hour, UPS will be able to plan a series of short routes, or one long route, on a single charge to meet customers’ needs.

“This is all about innovation with a focus on returns for our business, our customers, and the environment,” said UPS Chief Information and Engineering Officer Juan Perez. “These new aircraft will create operational efficiencies in our business, open possibilities for new services, and serve as a foundation for future solutions to reduce the emissions profile of our air and ground operation.”

The aviation industry is focusing on small aircraft, which UPS uses to serve many small and medium-sized communities, to develop groundbreaking, sustainable electric-powered aircraft. BETA’s aircraft has four fixed vertical lift propellers and one pusher propeller for forward flight. It can charge in an hour or less, and produces zero operational emissions.

“We’re combining simple, elegant design and advanced technology to create a reliable aircraft with zero operational emissions that will revolutionize how cargo moves,” said BETA founder and CEO Kyle Clark. “By utilizing vertical takeoffs and landings, we can turn relatively small spaces at existing UPS facilities into a micro air feeder network without the noise or operating emissions of traditional aircraft.”

After the batteries’ first life cycle in the aircraft concludes, they can be fitted to the charging stations to recharge the aircraft’s onboard batteries as well as UPS’s fleet of electric ground vehicles. UPS currently operates more than 12,000 alternative fuel and advanced technology vehicles, and announced a commitment to purchase up to 10,000 Arrival electric vehicles.

BETA’s aircraft are designed to someday operate autonomously as technologies and regulations are established. UPS Flight Forward received the first U.S. Federal Aviation Administration (FAA) Part 135 Standard air carrier certification to operate a drone airline, and is operating daily revenue-generating flights with drones. The FAA certification also enables UPS Flight Forward to fly payloads of up to 7,500 lbs. either with an operator or autonomously.

Last month, BETA advanced to the next phase of flight testing, completing an interstate flight from its Plattsburgh, NY test facility to its Burlington, Vt. headquarters. In accordance with FAA protocols for experimental aircraft to fly beyond its home airport, BETA had to complete rigorous testing to ensure reliable and predictable behavior of the aircraft. In the same week, the company set a new personal-best in range while also reaching 8,000 feet in altitude.

The first ten BETA aircraft are scheduled to begin arriving in 2024, with an option to purchase up to 150 of the aircraft.

UPS (NYSE: UPS) is one of the world’s largest package delivery companies with 2020 revenue of $84.6 billion, and provides a broad range of integrated logistics solutions for customers in more than 220 countries and territories. The company’s more than 540,000 employees embrace a strategy that is simply stated and powerfully executed: Customer First. People Led. Innovation Driven. UPS is committed to being a steward of the environment and positively contributing to the communities we serve around the world. UPS also takes a strong and unwavering stance in support of diversity, equity and inclusion.

The company can be found on the Internet at www.ups.com

AIRT Helps Save Lives with Drones, Esri ArcGIS, and other Location Intelligence Technologies