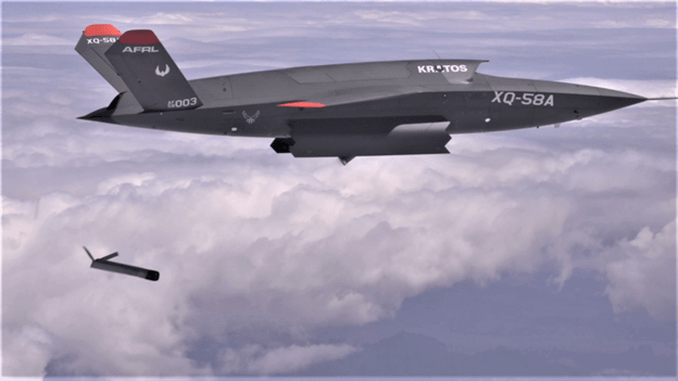 teve Fendley, President of Kratos Unmanned Systems Division, said, “Successful operation of the internal weapons release system/function along with further aerodynamic envelope increases continues to assert the incredible capability and cost-per-performance value of the low-cost attritable XQ-58A Valkyrie. Additionally, this unique and key mission function success adds an exclamation point to the 30-month development of the Valkyrie system by the Kratos and AFRL team, which resulted in a pre-production system with substantial operational capability, not simply a proof-of-concept flight demonstrator.”

This test demonstrated the ability to launch a small, unmanned aircraft system (SUAS) from the internal weapons bay of the XQ-58A. Kratos, Area-I and AFRL designed and fabricated the SUAS carriage and developed software to enable release. After successful release of the ALTIUS-600 SUAS, the XQ-58A completed additional test points to expand its demonstrated operating envelope.

“This is the sixth flight of the Valkyrie and the first time the payload bay doors have been opened in flight,” said Alyson Turri, demonstration program manager. “In addition to this first SUAS separation demonstration, the XQ-58A flew higher and faster than previous flights.”

The XQ-58A Valkyrie system, developed by Kratos Unmanned Systems Division in partnership with the Air Force Research Laboratory (AFRL) on the Low-Cost Attritable Strike Demonstrator (LCASD) Program, is a low-cost, multi-mission, runway-independent unmanned air vehicle (UAV) capable of long-range flights and high-subsonic speeds intended to support a variety of defense mission applications. In addition to the Valkyrie’s extreme survivability and adaptability, as part of the Low-Cost Attritable Aircraft Technology (LCAAT) portfolio, it is designed to break the escalating cost trajectory of tactically relevant aircraft.

In December 2020, Kratos received a $37.7 million contract from the AFLCMC/WA Advanced Aircraft Program Executive Office for Skyborg Delivery Order (DO) 2 to integrate, test, and deliver the XQ-58A Valkyrie system.

Eric DeMarco, Kratos CEO, said, “I am very proud of the team’s continued success in implementing our strategy of having the right product at the right time and at the right price. This strategy is particularly timely based on the near-term budget realities and from a technology perspective ties to the present day near peer threats from nation state adversaries. Kratos remains fully focused on the rapid development of affordable defense technology systems, on schedule and on budget for our customers.”