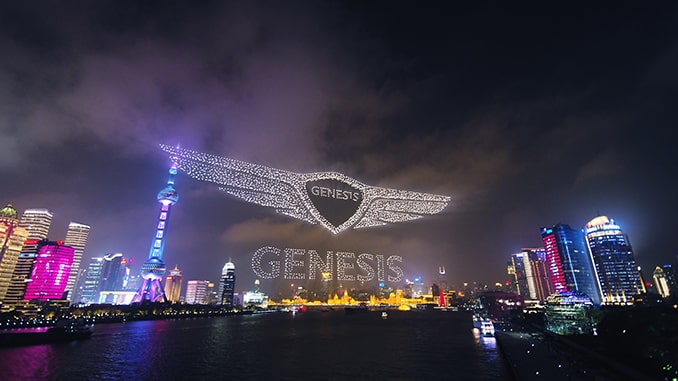 Genesis stirred a sensation in Shanghai on March 29, lighting up the evening sky with thousands of drones in a stunning performance to celebrate the official entry of Genesis into the Chinese market. The spectacular visuals were coordinated to present the world of Genesis, delivering an audacious storytelling concept while also breaking the Guinness World Records for “The Most Unmanned Aerial Vehicles (UAVs) airborne simultaneously”.

Markus Henne, Chief Executive Officer of Genesis Motor China, said, “At the heart of the Genesis promise is the daring spirit to do things differently. Our first-ever moment in China was a special opportunity to engage with our audience and show what Genesis is about. With this record-breaking drone performance, we brought our brand story and philosophy to life for many Chinese consumers. Soon, we will bring even more inspiring Genesis experiences and products to the consumers in China.”

Set above the glittering skyscrapers of the iconic Shanghai skyline, the complex and innovative production was designed to showcase Genesis’s unique brand concept and design philosophy. The performance, titled the “Genesis of Genesis”, represented the beginning of the brand in China and transformed the skies of central Shanghai into a canvas for thousands of illuminated drones to “paint” the brand story of Genesis. Audiences on both sides of the Bund witnessed the brand’s signature design elements animated in the air, such as the elegant sweep of the brand’s Two Lines concept expressed in harmony with the fluent lines of the unmistakable Genesis silhouette and Crest grille – as well as a preliminary look at the Genesis G80 and GV80, the expressions of “Athletic Elegance”.

This spectacular drone show not only broke the existing Guinness World Record for “The Most Unmanned Aerial Vehicles (UAVs) Airborne Simultaneously”, but also represents the audacious spirit of Genesis to challenge conventions, break through the boundaries and inspire new possibilities. At the climax of the show, 3,281 drones came together to create the Genesis emblem, breaking the world record, sending an exceptional greeting to China while signifying the arrival of an all-new force in the market. As its first-ever event in China, the performance presented an exclusive first look into the progressive approach of Genesis to reshape the entire luxury experience for Chinese consumers.

* The Guinness Record for “The Most Unmanned Aerial Vehicles (UAVs) Airborne Simultaneously” was broken on March 29, 2021.

Genesis is a global luxury automotive brand that delivers the highest standards of performance, design, safety, and innovation. The Genesis brand is one of the highest-ranked brands in the automotive industry by respected, third-party experts including North American Car of the Year, Consumer Reports and J.D. Power and more.

For more information on Genesis and its new definition of luxury, please visit https://www.genesis.com.cn