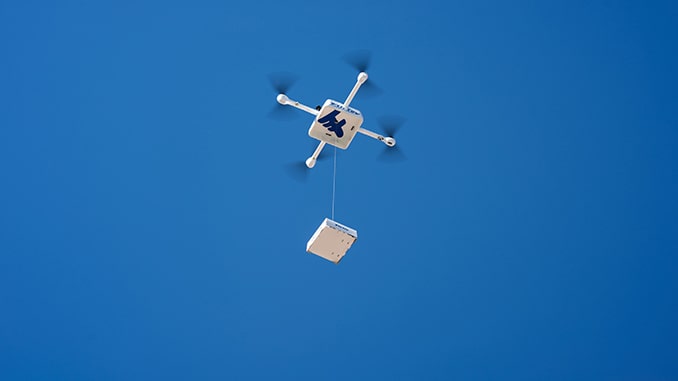 Flirtey, the pioneer and a leader in the commercial drone delivery industry, today announced that it has completed the technology to certify and expand U.S. production of its best-in-class drone delivery system for last-mile delivery.

The aircraft designer and manufacturer’s technology includes the Flirtey Eagle, an advanced drone that conducts precision delivery to homes and businesses; the Flirtey Portal, a take-off and landing platform that conducts scalable operations from storefronts; and Flirtey’s autonomous software platform that conducts autonomous flight operations. Flirtey’s technology solves the last-mile delivery problem with faster, lower cost, and more convenient delivery, which takes vehicles off the roads, reduces CO2 emissions and increases the overall safety of the transport system. Flirtey’s technology enables small and large businesses to operate their own logistics by providing store-to-door drone delivery to their customers, and Flirtey is now taking pre-orders.

Flirtey’s advanced technology development was led by the head of NASA’s program to fly drones over people, and first unveiled at The National Press Club in Washington, D.C. Flirtey now has more than 1,000 patent claims across a portfolio of granted and provisional patents, and has conducted more than 6,000 flights to date. With a safety-first approach, the company implemented a parachute system that can safely deploy from the delivery altitude; the aircraft lowers packages on a tether, enabling safe and precise drone delivery to homes and businesses. This marks completion of the Flirtey Eagle drone delivery system for FAA Type Certification (the FAA is working with Flirtey and a select group of companies for Type Certification).

“In-Q-Tel scouts the global market for cutting-edge technologies that have the potential for both commercial success and high national security impact, and we’re excited to be an investor in Flirtey, which has built best-in-class technology for last-mile drone delivery,” said Andy Ku, Principal, In-Q-Tel.

Flirtey is focused on completing the FAA’s certification process, scaling fast in New Zealand where the company’s technology already has regulatory certification, and expanding U.S. production of delivery drones to meet growing demand.

Former Assistant Secretary of the US Air Force Dr. Will Roper Joins Volansi Board of Directors