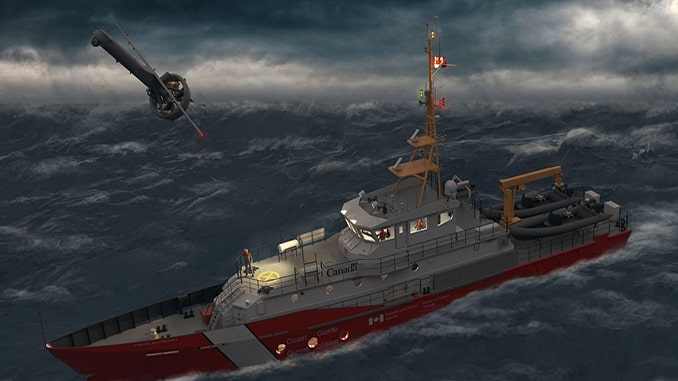 Kongsberg Geospatial announced today that it has been selected by Defence Research and Development Canada (DRDC) to conduct trials of a new long-endurance UAV surveillance system for the Canadian Coast Guard. The MartinUAV V-BAT aircraft was selected to provide the unique ability to combine take off and landing from the small confines aboard ship with the long endurance of a fixed-wing aircraft while carrying multiple sensors.

The aircraft will communicate with the Kongsberg Geospatial sensor data management system, called MIDAS, which allows a range of sensor data, including full-motion video from unmanned systems to be processed and exploited in near real-time by analysts on board Canadian Coast Guard ships. MIDAS provides the capability to compare historical and live data from the mission area, and to examine sensor data with a variety of tools, including motion and object detection, in near-real time. This near real-time analytical capability can greatly enhance the effectiveness of UAVs for a variety of mission types.

The V-BAT Unmanned Aerial System (UAS) provided by Martin UAV is a fixed-wing vertical take-off and landing (VTOL) aircraft specifically designed to operate from very small spaces on ships, land, and nearly any environment. The V-BAT is a long-endurance aircraft capable of carrying multiple sensors, including land and maritime wide area surveillance.

Kongsberg Geospatial’s MIDAS is derived from technologies created for the NATO Alliance Ground Surveillance project which required the storage and retrieval of vast amounts of intelligence data for Intelligence Analysts. The system directly addresses the problem that the vast majority of UAVs have no standards-compliant capability to process, exploit, and distribute (PED) their sensor data where it is being used. MIDAS provides a fully standards-compliant system that allows intelligence analysts to view, process, and analyze sensor data in near real-time, from where the drone is being operated. MIDAS has packaged these capabilities into a tactical and portable form factor to enables those surveillance capabilities to be deployed as a portable system on board a ship, or in a temporary command post.

CINTIQS Military Technology Consulting will be providing consulting services for the planning and conduct of the flight trials and sensor employment to validate systems performance.

The combination of the Martin UAV V-BAT and the Kongsberg MIDAS sensor data management system will allow Coast Guard vessels to significantly expand their surveillance range for search and rescue missions, and for the surveillance of the movement of icebergs, without requiring the use of manned aircraft.

“UAVs are a useful tool, but they only truly effective if they can collect sensor data that results in actionable intelligence,” said Ranald McGillis, President of Kongsberg Geospatial. “Our MIDAS system allows users to fully exploit raw sensor data, and derive useful intelligence at the tactical edge where the UAV is being used. In a search and rescue context, that could mean using infrared sensors, or near real-time motion detection to locate a subject when visibility or weather conditions are poor.”

About Martin UAV: Based in Plano, TX, (http://martinuav.com/) the mission of Martin UAV is to build the world’s most advanced unmanned systems. Our technology team specializes in building tactical systems from the ground up, addressing the vast capability gaps left by legacy technologies and current government programs of record around the world. With decades of research and development, our platforms offer cutting edge applications and engineering feats unmatched in the government or commercial sectors of today.

About CINTIQS: Based in Ottawa, Canada, CINTIQS (https://cintiqs.com) is a veteran-owned and operated MilTech (Military Technology) business focused on helping Canadian technology companies solve the problems that matter most to those in uniform. CINTIQS represents the highest concentration of tactical, operational, and strategic-level military intelligence expertise in Canada. In combination with their technical and industry/business depth, the company provides the expertise you need to succeed in the ultra-competitive global defence market.

About the Canadian Coast Guard: Headquartered in Ottawa, the Canadian Coast Guard (https://www.ccg-gcc.gc.ca/index-eng.html) is the coast guard of Canada. Founded in 1962, the coast guard is tasked with marine search and rescue, communication, navigation and transportation issues in Canadian waters, such as navigation aids and icebreaking, marine pollution response and providing support for other Canadian government initiatives. The coast guard operates 119 vessels of varying sizes and 22 helicopters, along with a variety of smaller craft.

About DRDC: Based in Ottawa, Canada, Defence Research and Development Canada (https://www.canada.ca/en/defence-research-development.html) is the Department of National Defence’s and Canadian Armed Forces’ science and technology organization. DRDC develops and delivers new technical solutions and advice for not only DND/CAF, but also other federal departments, and the safety and security communities.