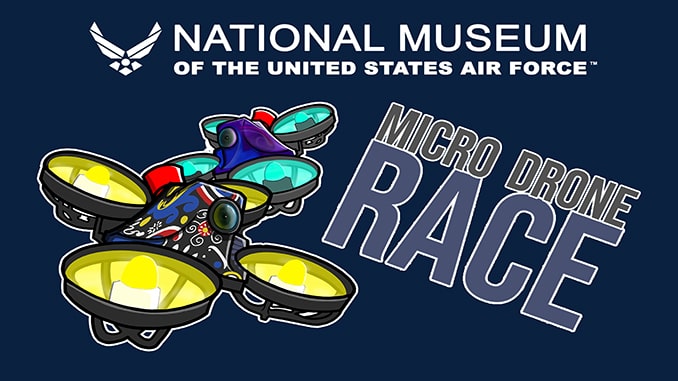 National Museum of the U.S. Air Force visitors will have the opportunity to see fast flying micro machines as 20 pilots maneuver their drones over, under, around and through the C-124 and F-82 aircraft during the museum’s second annual micro drone race on Feb. 20.

Registered drone pilots will begin practicing at 9 a.m. and then race in a series of 2-minute heats with four drones in each heat from approximately 11 a.m. – 5 p.m. Spectators will be able to watch the race along the course in the museum’s second building, as well as from a large screen that will show the drones’ perspective as they are racing.

From 9 a.m. – 4 p.m., visitors will also be able to experience flying a drone with computer-based simulators from the Air Force Research Lab (AFRL), Sinclair College Unmanned Aerial Systems (UAS) program, the museum’s Education Division, and the Drone Racing League (DRL) – a global, professional drone racing circuit for elite pilots with custom built racing drones traveling from 0 – 90 mph in under a second. Visitors can then fly an actual drone in two designated areas courtesy of AFRL and the museum’s Education Division.

n addition, Sinclair College’s UAS program will have a vertical take-off and landing (VTOL) and fixed wing UAS on display inside the museum, and their Mobile Ground Control Station will be parked outside of the museum’s main entrance for photo opportunities throughout the day.

Those who cannot attend the race in person at the museum may follow along with the live broadcast on the Cincinnati Quad Racers YouTube channel –https://youtube.com/c/CincinnatiQuadRacers. (Federal endorsement is not implied.)

For additional information, including a map of the event area, visit www.nationalmuseum.af.mil/Upcoming/Micro-Drone-Race/.