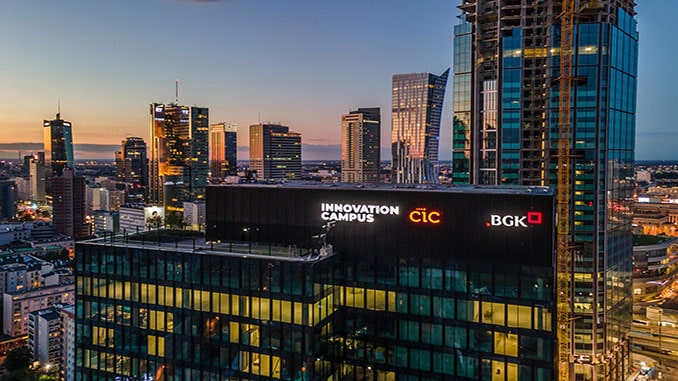 Dronehub – a European leader in comprehensive drone-in-a-box solutions – aims higher and higher. Since February, the Warsaw office has been located in the Varso Place complex, which includes Varso Tower – the tallest office building in the European Union.

“Relocation to such a prestigious office complex as Varso Place is the next step in the development of our company. As an innovative company providing modern drone infrastructure, we are always looking for the most innovative and effective solutions. Thanks to relocation, we are at the very center of the Polish business and innovative environment” – said Vadym Melnyk, founder and CEO of Dronehub.

The Varso complex consists of three parts, one of which – the Varso Tower – is 310 meters high, making it the tallest office building in the European Union. The complex houses among others the Polish development bank BGK and the NYX Hotels. The Dronehub office is part of the Cambridge Innovation Center (CIC Warsaw) located in the Varso 2 building, alongside companies such as Box and Tidio.

“We are glad that the CIC Warsaw community is growing with another valuable customer, Dronehub. Realizing that drones play an increasingly important role in many areas of our lives, we see a huge added value in the presence of Dronehub in the space of the Innovation Campus” – said Jerzy Brodzikowski, General Manager of CIC Warsaw.

“So far, over 6,500 companies have had their headquarters at the Cambridge Innovation Center around the world – from such giants as Microsoft, IBM or L’Oréal, to startups such as HubSpot or Amazon. This is the path we want to follow” – added Melnyk, CEO of Dronehub.

The Warsaw office of Dronehub has so far been located in the Royal Wilanów office building. The company’s headquarters, including the production part, remains in the Aeropolis complex in Jasionka near Rzeszów (Poland).

Dronehub is a European leader in comprehensive drone-in-a-box solutions. It is the only manufacturer in the world to provide a docking station that enables automatic battery replacement in a drone. Thanks to this innovative solution, drones can perform missions 24/7 without human intervention. Dronehub solutions are designed for monitoring, inspection and measurement in industry and agriculture. The company cooperates with the European Space Agency and the European Defense Agency. Dronehub’s software and hardware is used e.g. by PKN Orlen – one of the biggest companies in Central & Eastern Europe.

More information about the company at www.dronehub.ai.