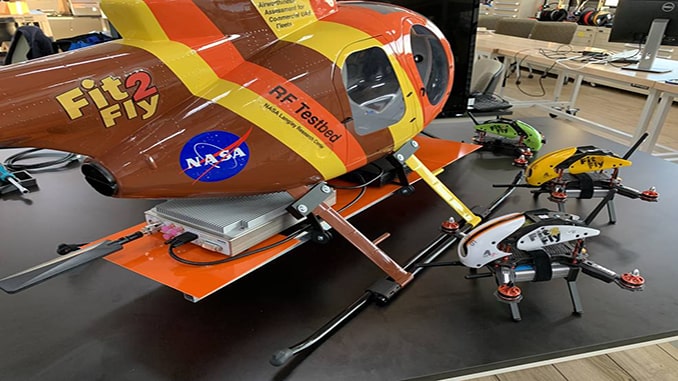 It’s a relative’s birthday and you’ve ordered a last-minute gift.

A delivery drone is assigned to fly your package from a distribution center out by the airport to your home downtown.

There’s a lot riding on this brief flight and you need to trust the small uncrewed aircraft isn’t going to crash and wreck the family birthday party, let alone endanger anyone along the way.

So, before it takes off, without any human nearby, the drone must make sure on its own that everything is working fine, and it’s safely fit to fly.

And then once in the air, will it be able to detect a problem during the flight, immediately and safely deal with the issue, and then report the trouble so repairs can be made, or other drone operators can watch out for the same trouble?

As more industries within and outside the aviation community become interested in using drones to provide services, the question of safety is paramount. These businesses must prove their aircraft won’t fall out of the sky, so people feel comfortable with them carrying important cargo like packages, emergency supplies, and even people.

“The gulf we’re trying to address is how we can get appropriate levels of safety and reliability from these new systems when they are so different from traditional aircraft,” said Garry Qualls, co-lead researcher on Fit2Fly at NASA’s Langley Research Center in Virginia.

Qualls and his colleagues envision a system in which individual drones are able to detect any technical issues by themselves.

But how would you prove a drone is safe to fly compared to the way it’s done with full-size, piloted aircraft?

In current aviation safety practices, each aircraft – whose design and construction has already been certified as safe using proven techniques refined over time – gets a final inspection by mechanics and/or pilots before every flight.

That wouldn’t be practical or affordable to do with a delivery drone or air taxi before every flight because they could be making many flights per day to different locations around a region.

“If you have to put three mechanics on the ground everywhere your air taxi lands, and they have to go over the aircraft for 30 minutes between each flight to check everything, it won’t work as a business,” Qualls said.

In other words, the safety practices that create trust between the aviation industry and the public today may be too costly and time-consuming for commercial drone users tomorrow.

However, if a drone is able to self-diagnose a fault it’s having, or even predict when a fault may occur, its owner saves the time and money of performing these frequent inspections – all while safety remains the number one consideration.

Before each flight, the drone would do a check-up on itself. If it found anything wrong, it would then decide whether or not it could still safely fly its assigned mission.

During a flight, if something went wrong, the drone would detect the problem immediately and land somewhere safe if the situation called for it.

For some of the things that go wrong, the vehicle would immediately transmit the situation and log the technical information in ways that can be accessed by all drone operators.

For example, let’s say the drone carrying the birthday present is flying through downtown when, suddenly, it loses communication with its operator.

“In that situation, we want to have the radios determine, without any human assistance, why we are losing that link,” said Casey Bakula, co-lead researcher on Fit2Fly at NASA’s Glenn Research Center in Cleveland.

The package delivery drone would be able to identify the source of the disruption, which in our example is a small radio signal “dead zone” in one part of the city. In that case, the drone could safely continue on its way, knowing the failure is not onboard, but somewhere else.

The drone logs data, and once communication with the ground returns, the incident is shared to an openly viewable network.

Now, other drone operators know to avoid the location, and both regulators and perhaps even the public if they have access to the information can see that the delivery company’s drone handled the situation safely.

“It gives operators tools that let them demonstrate their aircraft’s safety conclusively to others. We won’t just have to take their word for it. We can verify it ourselves,” Qualls said.

In addition, in this example, since the drone determined why communication was lost on its own, Bakula said, “the time-consuming and costly task of sending out a team of people to identify the source of the problem is eliminated.”

This transparent, detailed safety record creates an incentive for businesses to operate well-designed, reliable drones that assures the public the drones are flightworthy and can be trusted.

Moreover, automating the collection, verification, and analysis of the data could dramatically lower the costs of complying with regulations, which can be substantial.

Taken altogether, ideally, that will mean those businesses will enjoy safe and profitable operations.

Since the activity was announced in 2017, researchers have built prototype drones and conducted several experiments and tests.

One recent Fit2Fly achievement was discovering how much information can be gathered about a drone and the area surrounding it from simple radio signals.

Even using just two radio channels, few by today’s standards, researchers gathered almost all the information they needed. “It left us imagining what we could do with even more channels and sophistication,” says Bakula.

The Fit2Fly research is one of many short-term activities underway as part of NASA’s Convergent Aeronautics Solutions (CAS) project.

The project seeks to fund out-of-the-box ideas from NASA research teams to see if their concepts to transform a particular area of aviation are feasible, and if so, how that work might be transitioned into NASA Aeronautics’ overall research programs.

To be considered, teams had to form on their own, represent multidisciplinary talents, and have members from more than one of NASA’s field centers in Virginia, California and Ohio, where aeronautics research is a major focus.

For a list of all the activities selected to participate in the CAS project, read more here.