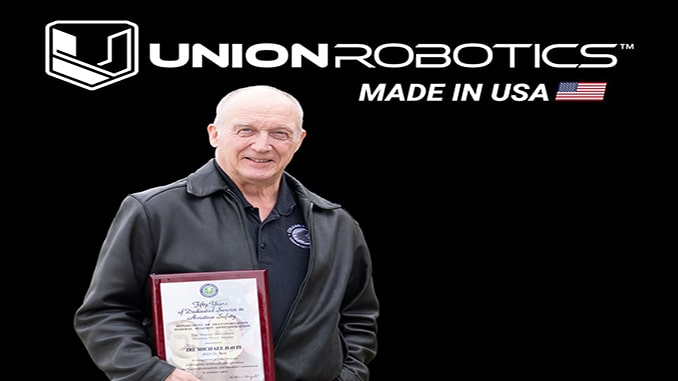 Mike Davis, a member of the Advisory Board for Union Robotics, has received the Federal Aviation Administration’s highest honor award, the Wright Brothers Master Pilot Award.

The award recalls pioneering aviators Wilbur and Orville Wright, who conducted the first powered flight on Dec. 17th, 1903. The award recognizes professionalism, skill and aviation expertise spanning at least a half-century of civilian and military service. As the FAA’s highest honor award, the FAA conducts extensive background research and only awards those who have dedicated a lifetime to aviation.

As a lifelong entrepreneur as well as a pilot, Davis founded and directed an electronic component manufacturing business with divisions in the United States, China, and Mexico from 1983 to 2005. Davis holds a Bachelor’s in Electrical Engineering and a Master’s in Law. He has a Commercial Pilot’s Certificate, with an instrument rating for single and multi-engine aircraft. Davis was appointed by Washington Gov. Christine Gregoire to serve on the state’s Global Competitiveness Council, and received the 2005 Marco Polo Award for global success in international business. Davis also served
as USA representative for the Investment and Support Agency of Turkey, focused on international business recruitment in Turkey.

“We are all proud of Mike, and this great achievement.” Ezekiel Bierschank, President of Union Robotics stated. “Mike is dedicated to improving the safety and training of UAV operations, and we think he is extremely deserving of this award.”

About Union Robotics:
Union Robotics, is a user-centric company that values customer needs and safety first. As a manufacturer of American made dielectric unmanned robotics, we provide customers access to critical data without risking safety or security around high voltage assets. Union Robotics engagement in advancing the field of industrial drone production is parallel by an equal commitment to ensuring the safety of our operators and the public.