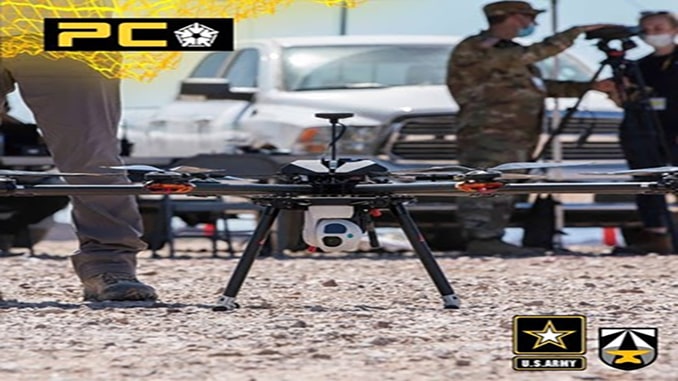 Utilizing SSCI’s FOCUS autonomy software, developed under various DARPA programs, the RAPTOR test vehicle was given the task to find and localize an “enemy” target military vehicle more than 1 km from RAPTOR’s launch location. Once tasked, the autonomy software successfully navigated the RAPTOR UAV to the search area and, with knowledge of the terrain below, controlled the aircraft flight path and camera direction. Identification of the military vehicle was performed using computer vision. An immediate alert was provided to the supervisor of the potential threat with a precise location and image for positive identification. RAPTOR returned home without requiring any additional direction from the supervisor.

To date, Project Convergence is the Army’s largest test event that showcases how cutting-edge AI capabilities can be used to speed up the sense-to-effects kill chain. SSCI’s Vice President of Research and Development, Dr. Owen Brown, states “The demonstration results of our RAPTOR system are a really big deal. What we have shown is how machine intelligence ‘at-the-edge’ can be used to dramatically shorten the ‘OODA loop’ and provide the military with a distinct advantage in the fight.”

It’s also notable that the SSCI software used to control RAPTOR was specifically designed to be agnostic to the UAV and sensor it controls so that only small modifications are needed to control other, potentially larger UAVs, and given the demonstration approach, shows the ability to evolve into multidomain operations.

Since 1990, Scientific Systems Company Inc. (SSCI) has been developing the brains and nervous system for manned and unmanned vehicles to operate autonomously and accomplish their missions in difficult environments for defense and commercial applications. Based in Woburn, MA, SSCI is a leading innovator in performing research and technology development for NASA and US DoD agencies. SSCI is a provider of artificial intelligence-enabled autonomous software systems for land, sea, air, and space systems, GPS-denied navigation systems, and mission planning systems. SSCI’s vision is to provide autonomy for any mission.