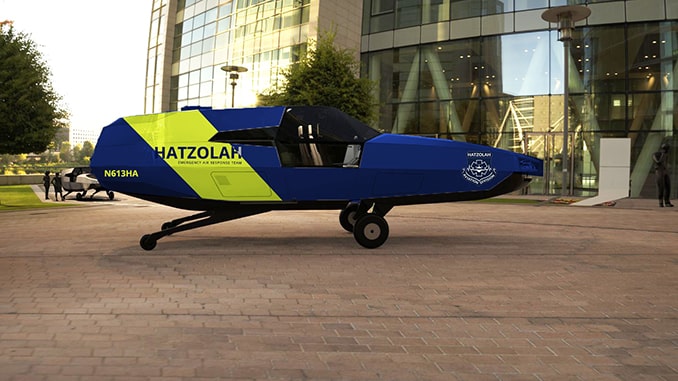 In addition, Hatzolah Air will become Urban Aeronautics’ official sales representative and distribution channel to other EMS and Rescue organizations worldwide. The companies previously signed an MOU to develop, produce, and market the CityHawk aircraft for EMS applications.

“Hatzolah’s pre-order of four air ambulance CityHawks is an amazing show of confidence in our program and in our company,” said Nimrod Golan-Yanay, CEO of Urban Aeronautics. “We look forward to delivering on our promise to revolutionize urban air mobility and the emergency response capabilities of major cities across the world.”

CityHawk is a lightweight twin-engine VTOL (vertical take-off and landing aircraft), with a uniquely compact footprint that can be optimized for urban transportation or emergency response. It will utilize jet propulsion, with cabins that are 20 to 30 percent larger and much quieter than comparable helicopters. The aircraft is planned to complete its development and FAA certification for EMS use and be ready for production within three to five years.

Hatzolah Air is a 501c3 Charitable Organization that provides urgent, emergent, rescue and charitable flights for patients and those in need. Hatzolah is widely recognized as providing the most advanced technology and highest quality of care available in the industry. Hatzolah Air currently operates fixed-wing aircraft for Hatzolah’s urgent and emergent missions and is excited to pioneer the VTOL alternative to ground based ambulances in densely populated urban settings globally.

Urban Aeronautics’ engineers are working closely with Hatzolah’s experts to tailor the CityHawk flying ambulance to their operational requirements.  It will accommodate a pilot, a patient plus companion, two EMS personnel, and a complete suite of onboard life support equipment.

“We are excited to become not just the worldwide distributor of Urban Aeronautics Air Ambulance CityHawk, but its first customer as well” said Eli Rowe, President of Hatzolah Air.
“Hatzolah’s mission is always about patient care and adding the VTOL CityHawk has the potential to save many thousands of lives every year”

Urban Aeronautics, a leading Israeli aerospace company revolutionizing the future of urban mobility, is designing and developing car-sized aircraft that will provide safe and rapid transport via seamless city integration. The pioneer in next-generation VTOLs is leveraging its groundbreaking internal rotor Fancraft™ technology to deliver the air mobility dream to everyone and everywhere. Utilizing Fancraft™, Urban Aeronautics designed the only safe, reliable, quiet, and sustainable VTOL that has no wings or exposed rotors and can fly and land where other vehicles cannot. Designed to meet FAA requirements, Fancraft™ utilizes powerful ducted fans, delivering superior control, stability, speed, safety, and noise reduction. Following more than 300 test flights, the technology has clearly demonstrated the potential to fly in crowded terrain including urban, wooded, and mountainous areas where it is difficult for rotary helicopters and other aircraft to safely operate.

Hatzolah Air’s mission is to provide, arrange, facilitate and fund local, national, and worldwide air transportation to those in need due to medical, humanitarian, disaster relief, compassion and/or other charitable reasons. Local Volunteer Hatzolah Ambulance Divisions collectively have thousands of volunteer Doctors, Paramedics and EMT’s with hundreds of ambulances around the globe collectively being one of the largest volunteer ambulance groups worldwide. Hatzolah (from the Hebrew word ‘rescue’) was first started in New York over 50 years ago and has branches, divisions and affiliates in many dozens of cities around the world. Hatzolah Air works with Hatzolah branches and other organizations around the world to provide flight support resources. Hatzolah Air is a leader in the transformation of the conventional ambulance into a flying ambulance.