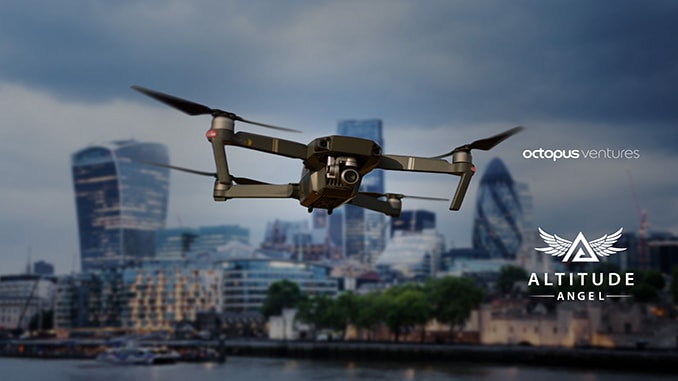 The latest fundraising concludes Altitude Angel’s series A round, led by Octopus Ventures and existing investor Seraphim Capital. It also brings the total invested in Altitude Angel in 2020 to £7.05m ($9.4m)

UTM is the platform which will allow UAVs (Unmanned Aerial Vehicles, sometimes called drones) and manned aircraft to operate harmoniously in shared skies. Through the widespread adoption of UTM platforms, governments and authorities will be able to begin building the super-highways of the future – networks of interlinking drone corridors which will revolutionise the transportation of goods; from medical supplies and fast-food deliveries to ‘Amazon-like’ parcel drop off and collections.

The investment will allow Altitude Angel to capitalise on its reputation as the world’s leader in developing and deploying local and national UTM platforms, allowing it to further expand its international presence and in doing so, accelerate the safe and secure use of drones in skies across the globe. Following the opening of its Dutch HQ in September, the company will be opening offices local to its international partners in addition to increasing its presence in markets promoting UTM growth through H1 2021.

Octopus Ventures’ Zoë Chambers will join the Altitude Angel board, which is chaired by former Microsoft executive Pieter Knook.

Zoë Chambers, deep tech investor at Octopus Ventures, said: “We’ve been talking about the potential of drones to radically transform all sorts of industries for a long time now, as the number of applications is huge, but for it to be viable, we need a system that can manage drones and, eventually, other types of unmanned air traffic at scale.

“Altitude Angel’s technology solves this problem and allows highly automated drones to be safely integrated within a nation’s airspace and, in doing so, allow drones to be used to survey infrastructure, deliver small parcels, or even deliver important medical supplies, such as donor organs, without disturbing normal air traffic.

“The market opportunity is enormous, and we firmly believe Altitude Angel’s UTM platform will become the blueprint for drone integration and the infrastructure layer for an unmanned air traffic networkacross the globe. Richard and his team have already made meaningful progress towards this goal and we’re excited to get to work to help realise their vision.”

Richard Parker, Altitude Angel, founder and CEO added: “Altitude Angel has consistently broken new ground in the development and deployment of Unified Traffic Management technology, pioneering the integration of UTM within existing ATM (Air Traffic Management) systems and networks. Our partnership with Octopus Ventures and the investment they have made in our business will allow us to significantly build on the foundations we’ve spent the past years laying.

“The substantial investments made in our company throughout 2020 – during a time of immense globally instability – demonstrate the solid basis for the business we’re building and means we can focus more on accelerating our growth and expansion plans, strengthening our existing solution portfolio and continue to deliver on our vision for the future of automated transport. As countries around the world rebuild from the impact of COVID, we’re going to help them build-back bigger, stronger and, most importantly: equipped to deal with tomorrow’s skies.”

This latest investment follows Altitude Angel’s announcement in September it would be opening the world’s first commercial drone super-highway in open and unrestricted airspace in the Thames Valley, to the west of London, in 2021. The corridor uses Altitude Angel’s “Arrow” technology.

Operated and managed by Altitude Angel, the site will be available to support fully automated drone flights beyond visual line-of-sight (BVLOS) from any drone company which completes a series of basic technical integrations which, crucially, don’t require specialist hardware on-board the drone.

Altitude Angel was founded in 2014 by Richard Parker and has quickly become the world’s leading UTM technology company. Its solutions are deployed by air navigation service providers (ANSPs) around the globe, including the Netherlands’ LVNL, Norway’s Avinor and the UK’s NATS, with further significant rollouts planned in 2021. Its market leading data is also used by drone manufactures, including the world’s largest, DJI, flight planning platforms and enterprise businesses.

Altitude Angel is an aviation technology company delivering solutions which enable the safer integration and use of fully automated drones into airspace. Through its Airspace Management platform, GuardianUTM O/S, they deliver the essential software platform which enable national deployments of U-space compatible services, safely unlocking the potential of drones and helping national aviation authorities and air navigation service providers to establish new services to support the growth in the drone industry.

The foundation components of GuardianUTM O/S are also available to enable third-party UTM developers to incorporate enterprise-grade data and services into their UTM solutions.

Altitude Angel’s developer platform is open and available to all at: https://developers.altitudeangel.com.

Octopus Ventures, part of the Octopus Group, is built to specialise in the four areas we believe will change the world for the better: health, money, deep tech and consumer.

We have backed the founding teams of more than 100 companies including Zoopla, Secret Escapes, graze.com, tails.com, Swiftkey, Elvie, Depop, Sofar Sounds, Big Health, Bought By Many, ByMiles, OLIO and Cazoo.

Some of our portfolio companies have gone on to join forces with the world’s largest businesses including Google, Amazon, Microsoft and Twitter.

With £1.3 billion under management and investing over £100m a year, Octopus Ventures is one of the largest and most active venture investors in Europe. Our typical investment is from £1 million for Seed to £10 million for Series B and we can continue to fund the companies we back right through to IPO.

We are based in London and New York with a network that spans from San Francisco to China. The companies we back become a part of this network, with access to a formidable resource of experience and expertise.