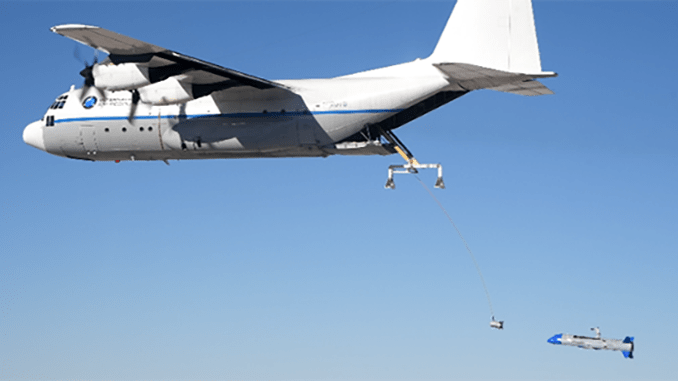 Attempts at airborne retrieval of three unmanned air vehicles, nicknamed Gremlins, were just inches from success in DARPA’s latest flight test series that started on October 28. Each X-61A Gremlins Air Vehicle (GAV) flew for more than two hours, successfully validating all autonomous formation flying positions and safety features. Nine attempts were made at mechanical engagement of the GAVs to the docking bullet extended from a C-130 aircraft, but relative movement was more dynamic than expected and each GAV ultimately, safely parachuted to the ground.

“All of our systems looked good during the ground tests, but the flight test is where you truly find how things work,” said Scott Wierzbanowski, program manager for Gremlins in DARPA’s Tactical Technology Office. “We came within inches of connection on each attempt but, ultimately, it just wasn’t close enough to engage the recovery system.”

Hours of data were collected over three flights, including aerodynamic interactions between the docking bullet and GAV. Efforts are already underway to analyze that data, update models and designs, and conduct additional flights and retrieval attempts in a fourth deployment this spring.

“We made great strides in learning and responding to technological challenges between each of the three test flight deployments to date,” said Wierzbanowski. “We were so close this time that I am confident that multiple airborne recoveries will be made in the next deployment. However, as with all flight testing, there are always real world uncertainties and challenges that have to be overcome.”

The goal of the Gremlins program is to demonstrate air launch and air recovery of four GAVs within 30 minutes. The capability of safe, effective, and efficient air recoveries will dramatically expand the potential uses of unmanned air vehicles in conflict situations. The GAVs can be equipped with a variety of sensors and other mission-specific technologies. They can also be launched from various types of military aircraft, keeping those less expendable assets beyond the range of adversary defenses. After air retrieval of GAVs, they would be transported back to the ground where crews could prepare them for another mission within 24 hours.

Dynetics, a wholly-owned subsidiary of Leidos, is developing the Gremlin vehicles.