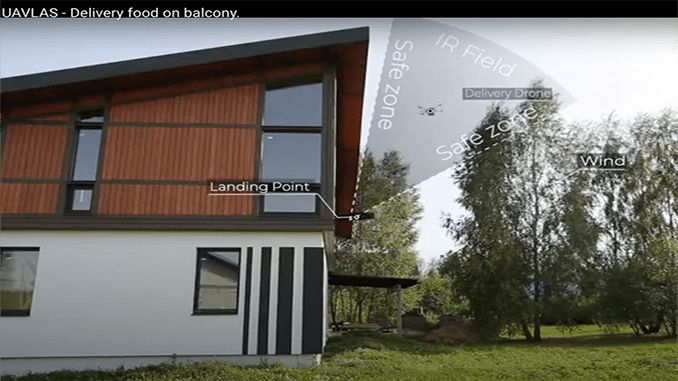 UAVLAS has introduced the ultra-high precision autonomous landing system for UAVs, a set of sensors and software that provides a direct connection between drone and landing site.  As a result, the advanced landing assistance system ensures an accurate and safe landing even in the absence or weak GPS signal, strong and gusty wind, landing on a charging station, or mailbox, operations in dark or fog. UAVLAS’s landing assistance system is aimed to solve the bottlenecks in the most costly & critical
segment last-mile delivery.

The ultra-high precision landing system consists of a ground transmitter (landing platform) and a lightweight onboard receiver on a drone (Plug&Play) and software enabling the system to operate with commonly known autopilots. The transmitter creates a virtual grid of positions above itself, and the receiver directed by the current grid square determines its
position in relation to the landing platform. Such design and software solutions reduce the risk of damage to the UAV through the guarantee of precise landing and extend its application.

Precision landing is a critical requirement for various drone applications. It is an essential feature for performing several accurate and efficient drone operations such as delivery, docking station, security and surveillance.

Yury Kapacheuski, CEO at UAVLAS, said: “At UAVLAS we have created a robust and reliable solution for precision landing on any desired site with maximum accuracy, for security, delivery, and inspection applications. Our ultra-high precision landing system is compatible with a wide range of drones. It offers the ability to autonomously land or hover a drone over a visual target for delivery, docking station, warehouse or asset inspection, even in GPS-denied environments”.

UAVLAS is a startup company based in Poland. The company specializes in developing advanced state-of-the-art sensors for drones and for other automatic and semiautomatic systems. UAVLAS has recently completed a Series A led by the EVIG Alfa Venture Capital Fund that was established in cooperation with Carlson Venture International LTD. Existing UAVLAS investor participation includes the Advanced Autonomous Solutions Fund and EVIG Alfa Venture Capital Fund.