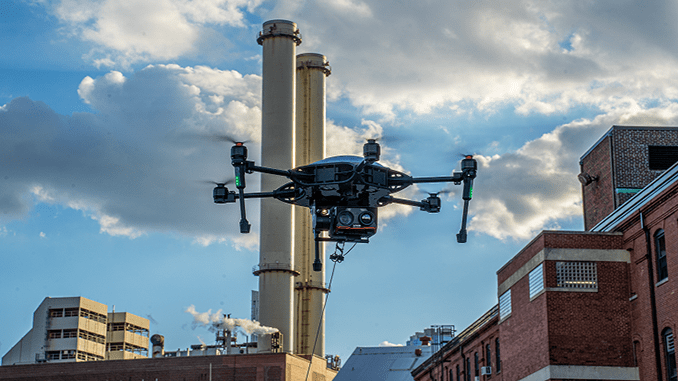 A reliable eye in the sky, the Albatross hexacopter is the most versatile and secure system in its class. Boasting a large 8.5lb payload capacity, the Albatross is ideal for extremely long overwatch or surveillance flights carrying multiple payloads in harsh weather conditions.

The Albatross is uniquely designed with three hardpoints. Each side hardpoint has a carrying capacity of up to 4lb, with the bottom hardpoint able to carry payloads of up to 8lb. Side payload stations feature standard mounting as well as Picatinny rails (also known as  MIL-STD-1913 rails and NATO STANAG 4694 military standard rail interface system) that support a wide range of payloads such as floodlights, communications relays, loudspeakers, and a range of cyber-related and other commercial and military electronic systems. The bottom hardpoint is designed for gimbaled cameras or large ISR payloads such as radars and communication jammers. Adding to its versatility, the Albatross offers over 20 EO/IR cameras, including the WIRIS Security and FLIR Duo Pro R cameras.

“Like all of Easy Aerial’s autonomous, cost-effective Smart Aerial Monitoring Systems, the Albatross combines drone-in-a-box simplicity with military-grade durability,” said Ido Gur, Co-Founder and CEO of Easy Aerial. “As the system can take off and land from a portable, rechargeable enclosure without the need for an on-site operator, it can be remotely deployed and operated from anywhere in the world, including GPS-denied environments.”

The drone also features multiple redundancies. For example, thanks to its numerous backup systems, the Albatross can continue to fly even in the event that one motor fails.

As with all Easy Aerial systems, the Albatross is deployed from an Easy Guard tethered (EG-T) ground-station. EG-T is a military-grade enclosure with a small footprint designed for rapid transport and set up by a two-person team. EG-T’s relatively small size and weight allow it to be rapidly mobilized and deployed from stationary and mobile launch sites such as a standard pickup truck or other vehicle configuration, traveling up to 25 miles per hour. For customers needing an ultra-portable solution, Albatross is also compatible with the SAMS-T-Mini EG-T designed for mission-critical, on-the-move operations.

“The synergy between 3D printing and composite materials has set the tone for our latest drone design. The intricate shapes of the printed parts are the ultimate solution to the geometric challenges while the composite materials secure a light and strong structure,” said Omri Dayan, Easy Aerial Chief Drone Designer. “The flat bottom plate and Picatinny rails were designed to allow the simplest integration of any payload with the user experience as the top priority.”

Easy Aerial solutions are rugged, durable, all-weather capable, and designed to operate in the most inhospitable environments with little to no infrastructure support. The company’s systems include free-flight (SAMS) and tethered (SAMS-T) autonomous systems that accommodate a variety of sensor payloads. With the ability to deploy anywhere, the systems take off and land from a portable, rechargeable enclosure without the need for on-site human intervention.

Easy Aerial is now accepting orders for the Albatross. Sales include on-site installation, training, and a limited warranty. Additional maintenance service packages are optional. For more information or to schedule a demo, visit www.easyaerial.com

Easy Aerial is a leading provider of autonomous drone-based monitoring solutions for commercial, government, and military applications. Developed and manufactured in the United States, Easy Aerial’s free-flight and tethered drone-in-a-box systems are fully autonomous, modular, portable, and rugged, with the ability to operate in the most adverse weather conditions. They can be deployed anywhere for a multitude of mission-critical applications such as perimeter and border security, event monitoring, first responder, agriculture monitoring, and industrial inspection, without needing a human operator. The company’s customer base includes military, government, aerospace, and commercial organizations in North America, Europe, Africa, and Asia. Easy Aerial was founded in 2015 with headquarters in Brooklyn, New York, and regional offices in Tel-Aviv, Israel, and Belgrade, Serbia.

UKRSPECSYSTEMS welcomes delegation visit from Ministry of Defence of Brazil