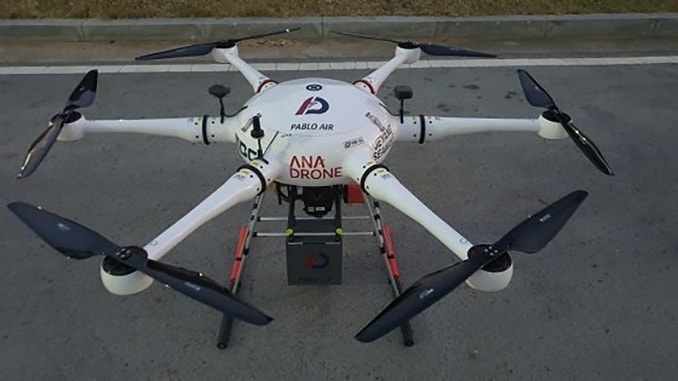 The successful drone delivery of emergency medicines and everyday items from mainland Korea to nearby islands has been the subject of significant attention. The long flight followed by accurate, simultaneous delivery of items by two drones departing at the same time is expected to open up the era of drone deliveries.

In a recent flight, PABLO AIR, a member company of Born2Global Centre, shipped medical supplies to two islands with two drones. The drones flew from Incheon New Port (management pier) to Yeongheungdo Island and Jawoldo Island, a roundtrip 50-mile journey, in one hour and 20 minutes.

This was the longest drone flight made in Korea and took place despite inclement weather (strong winds). Vertical takeoff-and-landing (V-TOL) drones were used for this test flight, and were operated with an independently-developed, web-based control system instead of the existing CS (Client-Server) control system.

Safety of the flight was ensured through real-time, simultaneous monitoring of both drones with three different communications technologies (LTE, satellite, RF wireless). With this system, monitoring was possible via computer, tablet PC, and mobile phone, making constant tracking possible regardless of location.

In November 2019, a PABLO AIR drone completed a 35.7-mile flight from Jejudo’s Seogwipo Port to Udo Port in one hour and 56 minutes—the longest drone delivery flight in Korea. The company is leading development of an UAM (Urban Air Mobility Personal Air Vehicle) market of the future by also engaging in non-delivery projects, such as an “art show” by a group of 300 drones.

Kim Young-jun, CEO of PABLO AIR, said, “Drone technology will create significant added value in the future of delivery shipping and bring greater convenience for users. The era of drone-shipped deliveries is fast approaching, which means we have to concentrate not only on developing safer, more precise technologies but also on entering foreign markets in 2021, using our unparalleled skill set. We will be collaborating with a variety of distribution companies worldwide in the coming years.”

Founded in 2018, PABLO AIR is a developer of unmanned aerial software and hardware. Its core business is the development of drone swarm platforms and provision of related solutions. Every PABLO AIR employee has expertise in drones and/or unmanned aviation. The company is developing technologies to make drones applicable on a wide scale, including in distribution, disaster detection, collection of environmental data, and entertainment.

The company succeeded in securing KRW 3 billion in Series A funding in collaboration with Lee Soo-man, chief producer of SM Entertainment, and the KTB Network. It has completed the development of its own drone hardware and is currently working on a software solution that integrates manned and unmanned drones. It is also pursuing projects in areas such as drone swarm technology-based logistics, disaster monitoring, and smart city environment monitoring. Its ultimate vision is to develop benchmark technology and set a new milestone in the PAV (personal air vehicle) air taxi industry.